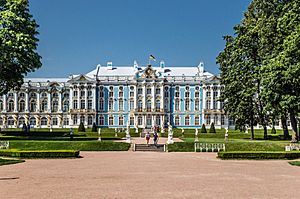 The Catherine Palace is a former Russian residence of the Russian Imperial family. It is in the town of Pushkin, Saint Petersburg.

The Palace's town was called Tsarskoye Selo which means Tsar's village in English. In 1918 the Bolsheviks changed the name to Detskoye Selo. In 1937 the town was renamed to Pushkin to honor Alexander Pushkin.

Catherine I of Russia began the building of the palace in 1717. She hired the German architect Johann-Friedrich Braunstein to create the summer palace. In 1733, Empress Anna added to the palace. Then in 1752 Empress Elizabeth had the palace torn down. It was rebuilt in a Rococo style. More than 100 kilograms of gold were used. Many statues on the roof were covered in gold.

Catherine the Great thought the palace was old-fashioned. She employed Scottish architect Charles Cameron. He made one wing into the Neo-Palladian style. He also changed the personal apartments of the Empress.

After Catherine's death the imperial family began using Pavlovsk Palace and Alexander Palace. The palace was destroyed during World War II. Restoration began soon after the German forces left. Now the palace is mostly restored and is open for tours.

All content from Kiddle encyclopedia articles (including the article images and facts) can be freely used under Attribution-ShareAlike license, unless stated otherwise. Cite this article:
Catherine Palace Facts for Kids. Kiddle Encyclopedia.