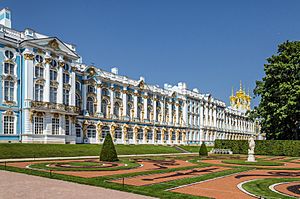 Tsarskoye Selo (Russian: Ца́рское Село́; "Tsar's Village") is an old Russian residence of the imperial family. It is located 26 kilometres (16 mi) south from the center of St. Petersburg, but is no longer a place for the imperial family. Instead, it is part of the town of Pushkin and of the World Heritage Site.

In the 17th century, the place belonged to a Swedish noble.

In 1708, Peter the Great gave the estate to his wife as a present. She helped in the making of the Blagoveschenskaya church there in 1724, and changed the name of the place to Blagoveschenskoye. However, this soon went out of use.

It was Catherine I who started to develop the place as a place for royal people. She built the Catherine Palace, now known as the Cameron Gallery.

By the end of the 18th century, Tsarskoye Selo became a popular place for noble people to visit in the summer. On September 17, 1941 the Germans destroyed the town of Pushkin, destroying many historical buildings and other artifacts.

All content from Kiddle encyclopedia articles (including the article images and facts) can be freely used under Attribution-ShareAlike license, unless stated otherwise. Cite this article:
Tsarskoye Selo Facts for Kids. Kiddle Encyclopedia.