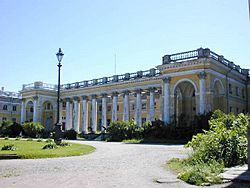 The Alexander Palace (Russian: Александровский дворец) used to be a place where rulers lived. It was in Tsarskoye Selo, near St Petersburg. It is mostly famous for being the place where the last Russian Emperor Nicholas II and his family lived. It is in the Alexander Park. It was called an "elegant building" with the "greatest simplicity" and "comfort".

All content from Kiddle encyclopedia articles (including the article images and facts) can be freely used under Attribution-ShareAlike license, unless stated otherwise. Cite this article:
Alexander Palace Facts for Kids. Kiddle Encyclopedia.