She was the second daughter of Christian IX of Denmark and Louise of Hesse. After her marriage to Alexander III of Russia, she became the Empress Consort of Russia as Maria Feodorovna (Cyrillic: Mapия Фёдopoвна). Among her children was the last Russian monarch, the Emperor Nicholas II, whom she outlived by ten years.

Princess Marie Sophie Frederikke Dagmar of Denmark was named after her kinswoman Marie Sophie Friederike of Hessen-Kassel (1767–1852), Queen Dowager of Denmark. Dagmar's father soon became an heir to the throne of Denmark, largely due to his wife's succession rights as niece of King Christian VIII. Born as a daughter of a relatively impoverished princely cadet line, she was baptized into the Lutheran faith. Her father became King of Denmark in 1863. Due to the brilliant alliances of his children, he became known as the "Father-in-law of Europe."

Most of her life, she was known as Maria Feodorovna (in Russian Мария Фёдоровна), the name which she took when converting to Orthodoxy immediately before her 1866 marriage to the future Tsar Alexander III. She was known within her family as Minnie.

Maria Feodorovna was the younger sister of Alexandra, Queen Consort of King Edward VII and mother of George V of the United Kingdom, which helps to explain the striking resemblance between Nicholas II and George V. Her brother was King George I of Greece.

The rise of Slavophile ideology in the Russian Empire led Alexander II of Russia to search for a bride of the heir apparent, Grand Duke Nicholas Alexandrovich of Russia, in other countries than petty German principalities which traditionally provided consorts for the tsars. In 1864, Nicholas went to Denmark, where he was betrothed to Dagmar. On 22 April, 1865 he died from tuberculosis. His last wish was that Dagmar would marry his younger brother, the future Alexander III.

Dagmar left Copenhagen on 1 September, 1866. Hans Christian Andersen was among the crowd which flocked to the quay in order to see her off. The writer remarked in his diary: "Yesterday, at the quay, while passing me by, she stopped and took me by the hand. My eyes were full of tears. What a poor child! Oh Lord, be kind and merciful to her! They say that there is a brilliant court in St. Petersburg and the tsar's family is nice; still, she heads for an unfamiliar country, where people are different and religion is different and where she will have none of her former acquaintances by her side".

Dagmar was warmly welcomed in Kronstadt by Alexander II of Russia and all his family. The wedding took place on 9 November [O.S. 28 October] 1866. 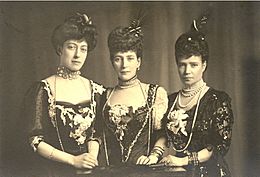 Maria Feodorovna was pretty and popular. She rarely interfered with politics, preferring to devote her time and energies to her family, charities and the more social side of her position. Her one exception was her militant dislike of Germany due to the annexation of Danish territories by the newly created German Empire. 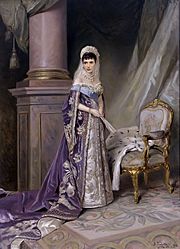 Dagmar's grandson-in-law, Prince Felix Yusupov, noted that she had great influence in the Romanov family. Sergei Witte praised her tact and diplomatic skill. Nevertheless, she did not get along well with her daughter-in-law, Alexandra Feodorovna, probably holding her responsible for many of the woes that beset the family of her son Nicholas.

Despite the overthrow of the monarchy (1917), the Empress Maria at first refused to leave Russia. Only in 1919, at the urging of her sister Alexandra, did she grudgingly depart, fleeing via Crimea over the Black Sea to London. King George V sent the warship HMS Marlborough to retrieve his aunt. After a brief stay in London, she returned to her native Denmark, choosing her former holiday villa Hvidøre near Copenhagen as her new home. Although Queen Alexandra never treated her sister badly and they spent holidays together in a shared cottage in Great Britain, Maria felt that she was now "number two".

Maria's later years were clouded by the deaths of many immediate family members even though she would not acknowledge the massacre of her son's family or permit any memorial rites to be held in her residence. Her letters to them have since almost all been lost; but in one that survives, she had written to her son: "You know that my thoughts and prayers never leave you. I think of you day and night and sometimes feel so sick at heart that I believe I cannot bear it any longer. But God is merciful. He will give us strength for this terrible ordeal." 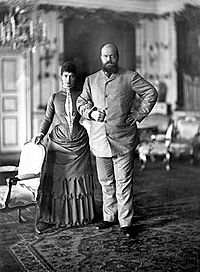 Maria Feodorovna died on 13 October 1928 at Hvidøre near Copenhagen, in a house she shared with her sister Queen Alexandra. According to the fictional film The Mystery of Anna, Anna Anderson was on her way to see the Empress but this is widely believed to be false, as Anderson was in America at the time of Maria's death. Maria Feodorovna never met Anna Anderson (who claimed to have been her granddaughter). Maria has been portrayed in many films most recently in the fictional cartoon form, voiced by Angela Lansbury in the Fox Animation Studios feature film Anastasia. She has been portrayed variously by Helen Hayes in the London production of the play "Anastasia". In the 1956 film Anastasia, based on the London theatre production, and by Irene Worth in Nicholas and Alexandra.

Following services in Copenhagen's Russian Orthodox Alexander Nevsky Church, she was interred at Roskilde Cathedral. In 2005, the governments of Denmark and Russia agreed that the Empress's remains should be returned to Saint Petersburg in accordance with her wish to be interred next to her husband. A number of ceremonies took place from 23 to 28 September 2006. The funeral service, attended by high dignitaries, did not pass without some turbulence. The crowd around the coffin was so great, that a young Danish diplomat actually fell into the grave. On 26 September, a statue of Maria Feodorovna was unveiled near her favourite Cottage Palace in Peterhof. Following a service at Saint Isaac's Cathedral, she was interred next to Alexander III in the Peter and Paul Cathedral on 28 September 2006, 140 years after her first arrival to Russia and almost 78 years after her death.

All content from Kiddle encyclopedia articles (including the article images and facts) can be freely used under Attribution-ShareAlike license, unless stated otherwise. Cite this article:
Maria Feodorovna (Dagmar of Denmark) Facts for Kids. Kiddle Encyclopedia.