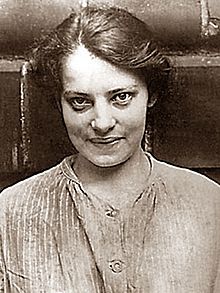 Anna Anderson (December 16, 1896 – February 12, 1984) was a woman who claimed she was Grand Duchess Anastasia Nikolaevna of Russia. The real Anastasia had been murdered in Ekaterinburg with the rest of her immediate family on July 17,1918. Her remains have been found and extensively tested using DNA samples from Anastasia's family comparing them to Anderson. There was no match at all. Anderson attempted to kill herself in 1920 in Berlin, Germany. She was taken to a mental hospital. A short time later she began to tell her false story of escape to people there. Some people believed her. Most people did not. Her false claims were pushed for 70 years. Movies were made about her story. She married Jack Manahan and called herself Anastasia Manahan. They lived in Charlottesville, Virginia, where she died of pneumonia in 1984.

All content from Kiddle encyclopedia articles (including the article images and facts) can be freely used under Attribution-ShareAlike license, unless stated otherwise. Cite this article:
Anna Anderson Facts for Kids. Kiddle Encyclopedia.