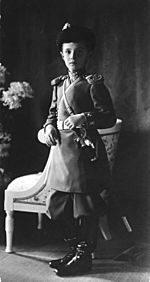 Tsarevich Alexei Nikolaevich Romanov (12 August 1904 – 17 July 1918) was the heir apparent of Russia during the Russian Revolution. He would have become Tsar Alexei II. He was the youngest of five children and the only son of Tsar Nicholas II of Russia and Alexandra Fyodorovna. His sisters were Olga, Tatiana, Maria, and Anastasia.

He had the disease hemophilia. He inherited the disease from his mother. The disease can be traced back to his great grandmother Queen Victoria. His father gave up the throne in 1917 and his family was exiled and then murdered in Ekaterinburg in 1918. When Alexei was struggling with hemophilia a Russian Orthodox monk named Grigori Rasputin, commonly known as Rasputin, healed Alexei better than any doctor could. This might have led to the family's murder, because they were so fond of Rasputin. Once Rasputin was murdered, Alexei and his family were murdered only two years later.

In 2000, Alexei and his family were made saints by the Russian Orthodox Church.

In 2008 his body was one of those found near the site where the family was murdered. DNA tests proved all 5 of the Tsar's children had been killed.

All content from Kiddle encyclopedia articles (including the article images and facts) can be freely used under Attribution-ShareAlike license, unless stated otherwise. Cite this article:
Tsarevich Alexei Nikolaevich of Russia Facts for Kids. Kiddle Encyclopedia.