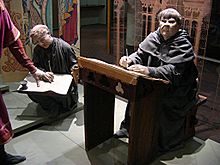 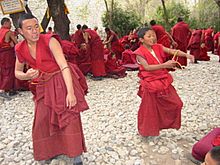 A monk is a man who devoted part or all of his life to a religion. The word comes from Ancient Greek, and can be translated as solitary. In Greek, the word can be used for men and women alike, but in English,a woman who does the same is called a nun. Monks practice asceticism. They either live alone, or together with other monks who share the same ideals. Monks can be found in different religions, most often in Buddhism, Christianity, Hinduism, Jainism and Taoism.

The monks who live on their own are usually called hermits, those living with other monks do so in monasteries. Nuns living together do so in a convent.

All content from Kiddle encyclopedia articles (including the article images and facts) can be freely used under Attribution-ShareAlike license, unless stated otherwise. Cite this article:
Monk Facts for Kids. Kiddle Encyclopedia.