A 3D model of Athos 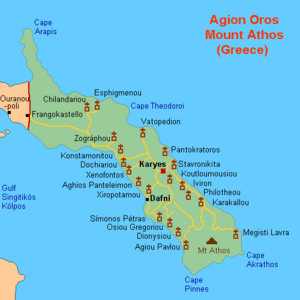 Mount Athos is a mountain in the Greek province of Macedonia. It is also commonly used to refer to the Self-governed Monastic State of the Holy Mountain, which is an autonomous part of Greece. There are twenty Eastern Orthodox monasteries inside this state.

Spiritually, Mount Athos comes under the direct jurisdiction of the Ecumenical Patriarchate of Constantinople.

The peninsula is the easternmost "leg" of the larger Halkidiki peninsula. It protrudes into the Aegean Sea for some 60 kilometres (37 mi) at a width between 7 to 12 km and covers an area of 335.637 square kilometres (129.59 sq mi), with the actual Mount Athos and its steep, densely forested slopes reaching up to 2,033 metres (6,670 ft). The seas around the end of the peninsula can be dangerous.

The peninsula is only accessible by boat. There is a limit on the number of visitors. People visiting need to get a special permit. Only men are allowed to enter. Monks call Mount Athos the "Garden of the Virgin"-. Orthodox Christians take precedence in the permit issuing procedure. Only males over the age of 18 who are members of an Eastern Orthodox Church are allowed to live on Athos (?). A large number of Albanian Muslims work in the Holy Mountain. There is a small number of unarmed, religious guards (Σερδάρηδες), who are not monks, for keeping order. Police and Coast Guard presence is very discreet. Any other people not monks are required to live in the peninsula's capital, Karyes (?) Most workers live at the place where they work. Small low class hotels exist at Karyes (administrative center) and Dafni (main port). The 2001 Greek national census recorded a population of 2,262 inhabitants.

All content from Kiddle encyclopedia articles (including the article images and facts) can be freely used under Attribution-ShareAlike license, unless stated otherwise. Cite this article:
Mount Athos Facts for Kids. Kiddle Encyclopedia.