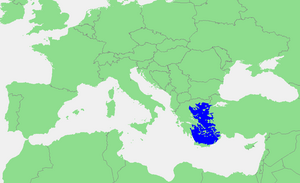 The Aegean Sea is an elongated embayment of the Mediterranean Sea located between the Greek and Anatolian peninsulas. The sea has an area of some 215,000 square kilometres. In the north, the Aegean is connected to the Marmara Sea and the Black Sea by the straits of the Dardanelles and Bosphorus. The Aegean Islands are located within the sea and some bound it on its southern periphery, including Crete and Rhodes. The sea reaches a maximum depth of 3,544 meters, to the east of Crete.

The Aegean Islands can be divided into several island groups, including Dodecanese, the Cyclades, the Sporades, the Saronic islands and the North Aegean Islands, as well as Crete and its surrounding islands. The Dodecanese, located to the southeast, includes the islands of Rhodes, Kos, and Patmos; the islands of Delos and Naxos are within the Cyclades to the south of the sea. Lesbos is part of the North Aegean Islands. Euboea, the second largest island in Greece, is located in the Aegean, despite being administered as part of Central Greece. Nine out of twelve of the Administrative regions of Greece border the sea, along with the Turkish provinces of Edirne, Canakkale, Balıkesir, Izmir, Aydın and Muğla to the east of the sea. Various Turkish islands in the sea are Imbros, Tenedos, Cunda Island, and the Foça Islands.

The Aegean Sea has been historically important, especially in regards to the civilization of Ancient Greece, who inhabited the area around the coast of the Aegean and the Aegean islands. The Aegean islands facilitated contact between the people of the area and between Europe and Asia. Along with the Greeks, Thracians lived among the northern coast. The Romans conquered the area under the Roman Empire, and later the Byzantine Empire held it against advances by the First Bulgarian Empire. The Fourth Crusade weakened Byzantine control of the area, and it was eventually conquered by the Ottoman Empire, with the exception of Crete, which was a Venetian colony until 1669. The Greek War of Independence allowed a Greek state on the coast of the Aegean from 1829 onwards. The Ottoman Empire held a presence over the sea for over 500 years until their dissolution, when it was replaced by modern Turkey.

The sea was traditionally known as the Archipelago (in Ancient Greek, Ἀρχιπέλαγος, meaning "chief sea"), but in English the meaning of archipelago has changed to refer to the Aegean Islands and, generally, to any island group. The rocks making up the floor of the Aegean are mainly limestone, though often greatly altered by volcanic activity that has convulsed the region in relatively recent geologic times. Of particular interest are the richly coloured sediments in the region of the islands of Santorini and Milos, in the south Aegean. Notable cities on the Aegean coastline include Athens, Thessaloniki, Volos, Kavala and Heraklion in Greece, and İzmir and Bodrum in Turkey.

A number of issues concerning sovereignty within the Aegean Sea are disputed between Greece and Turkey. The Aegean dispute has had a large effect on Greek-Turkish relations since the 1970s. Issues include the delimitation of territorial waters, national airspace, exclusive economic zones and flight information regions.. 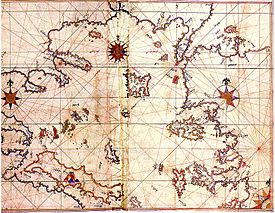 In ancient times two groups of people lived near the sea – the Minoans of Crete, and the Myceneans of the Peloponnese. The city-states of Athens and Sparta came later and were part of Ancient Greece. Persians, Romans, the Byzantine Empire, the Venetians (people from Venice, the Seljuk Empire, and the Ottoman Empire later started around the Aegean Sea. The people near the Aegean were very advanced (powerful and clever) in Ancient history and they sailed across it to talk to each other.

There are seven groups of Aegean islands: the Thracian Sea group, the East Aegean group, the Northern Sporades, the Cyclades, the Saronic Islands (or Argo-Saronic Islands), the Dodecanese and Crete. The word archipelago used to mean these islands. Many of the Aegean islands, or chains of islands, are part of the mountain ranges on the mainland. One chain goes across the sea to Chios, another one goes across Euboea to Samos, and a third one goes across the Peloponnese and Crete to Rhodes. This one divides (splits, cuts) the Aegean from the Mediterranean. Many of the islands have safe harbours and bays, but sailing in the sea is difficult. Many of the islands are volcanos, and marble and iron are mined on other islands. The bigger islands have some green valleys and plains. Two big islands on the Aegean Sea are part of Turkey: Bozcaada and Gökçeada.

All content from Kiddle encyclopedia articles (including the article images and facts) can be freely used under Attribution-ShareAlike license, unless stated otherwise. Cite this article:
Aegean Sea Facts for Kids. Kiddle Encyclopedia.