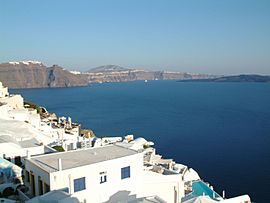 Santorini is a Greek island. The capital is Thira. Santorini is 63 miles from the island of Crete. The total population is 13,600.

Santorini is considered an active volcano.

Human presences on the island seem to have existed since the middle of the 3rd millennium B.C. The excavations at Akrotiri have confirmed that human activity on the island continued until the eruption of the volcano around 1500 B.C, which entirely buried the island beneath very thick layers of pozzuolona. At that point, all traces of human activity vanished from the island until the end of the 13th century B.C.

According to Herodotus, the island was initially called Strongyle (the Round One). Then later, because of its beauty, it was named Kalliste (the Fairest One). The Phoenicians settled in Kalliste, and after the Phoenicians, the Lacedaemonians arrived and renamed the island after their leader, Theras. In the 9th century B.C. Thera, became an important stopping point of that era in the travel routes between the East and the West. The Phoenician alphabet was adopted at this time for writing in the Greek language. Interestingly though, the conservative Therans, did not follow the cultural development of their counterparts in the other Cycladic islands. At about 630 B.C the Therans reached the north coast of the African continent where they founded Cyrene, the only Theran colony. From as early on as the 6th century B.C. Thera had its own coinage. During the Classical period in Greece [5th and 4th century B.C.] Thera did not play any significant role in the events of that Hellenic time. During the Peloponesian War Thera sided with Sparta, as expected. In Hellenistic times the island's strategic position made Thera an important base for the war campaigns in the Aegean of the successors to Alexander the Great.

During the Roman Empire, Thera was little more than a small, insignificant island. However, when Christianity reached the island early, an organized church was established by the 4th century A.D. The island had neither political nor military significance in Byzantine times, although Alexius I Comnenus [1081 - 1118] founded the church of the Panagia Episkopi at Gonia. After the fall of Constantinople in the Fourth Crusade [1204], the Duchy of Naxos was founded and Thera became the seat of one of the four Catholic Bishops of the Duchy. The name Santorini was given at that time by the Crusaders, named after a small chapel of Agia Irini [Santa Irene] which some say was at Perissa and others say it was at Riva on Therasia.

In the years under Frankish rule [1207 - 1579], Santorini experienced the development of a thriving cotton cultivation and viticulture, but the island suffered as much from piratical raids as it did from the rivalries between the local Latin rulers as well as the Duke and the Sultan.

The Turkish dominion [1579 - 1821] resulted in the abolition of piracy and the development of international trade. The Santorinians created close contacts with the great harbours of the Eastern Mediterranean (Alexandria, Constantinople, Odessa) where they founded important communities.

In 1821, Santorini with its shipping power, took part in the fight for independence from the Turks, and in 1830, the island became part of the independent Greek state. Up until the beginning of the 20th century shipping, textiles, tomato production and viticulture were all flourishing markets, but the change from sail to steam-driven ships and the relocation of the island's factories to mainland Greece had a negative effect on the island's economy. After the 1956 earthquake there was a huge decrease in the population resulting in an economic catastrophe. Towards the end of the 1970s however, tourism began to develop, bringing economic relief to the island. The present-day crescent shape of the island is a consequence of the activity of the volcano in prehistoric times. The island itself owes its very existence to the volcano.

The last huge eruption of the volcano dates back 3,600 years, to the late Bronze Age. Thirty million cubic meters of lava in the form of pumice and ash were blown to a height of up to 36 kilometers above the island. Pumice deposits, dozens of meters thick, buried one of the most prosperous pre-historic settlements of that period, feeding the myth of the lost Atlantis.

The mild activity of the volcano after this major eruption continues into the present (the most recent eruption occurred in 1950) building up two small islands within the caldera, Palea and Nea Kameni. These islands represent the volcano's most recent activity.

The marvelous dry climate and continuous sunshine create year around conditions which are perfect for observation, photographs and videos under an extraordinary variety of natural lights and colours that give the visitor the exceptional advantage of reaching the interior of the volcano by boat.

The banks on Santorini are open 8.00 am-2.30 pm Monday to Thursday and 8.00 am-2.00 pm on Friday. ATMs are available in almost all villages on Santorini. Most accept Visa and MasterCards as well as debit cards of internationally recognised networks.

Bottled water is recommended for drinking. Tap water can be used for washing, bathing and cleaning your teeth. In the area of Oia the tap water that comes from the local desalination plant is drinkable.

ELTA is the official name of the postal service and their colours are blue and yellow. The main postal offices on Santorini are in Fira, Emporio and Oia. Postal agencies are in Pyrgos, Kamari and Perissa. Mailboxes are available in all the villages of Santorini. A standard letter or postcard less than 20 grams sent anywhere in Europe or abroad costs €0.65 (as per April 2007). Courier services are also available.

Most hotels provide internet access for their guests. Internet cafés are available mostly in Fira.

Santorini National Airport,an airport that serves as both military and civil airport, is north of the village of Kamari. The airlines that run here include Olympic Air and Aegean Airlines. To get to and from the airport you can use buses, taxis, hotel car-pickups and rental cars.

All content from Kiddle encyclopedia articles (including the article images and facts) can be freely used under Attribution-ShareAlike license, unless stated otherwise. Cite this article:
Santorini Facts for Kids. Kiddle Encyclopedia.