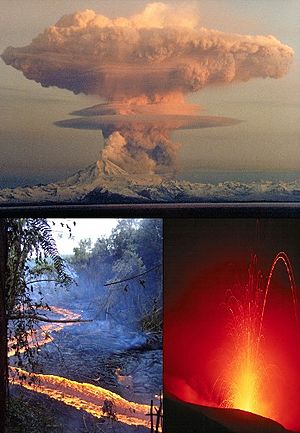 A volcanic eruption occurs when hot materials from the Earth's interior are thrown out of a volcano. Lava, rocks, dust, and gas compounds are some of these "ejecta".

Eruptions can come from side branches or from the top of the volcano. Some eruptions are terrible explosions that throw out huge amounts of rock and volcanic ash and can kill many people. Some are quiet outflows of hot lava. Several more complex types of volcanic eruptions have been described by volcanologists. These are often named after famous volcanoes where that type of eruption has been seen. Some volcanoes may show only one type of eruption during a period of activity, while others may show a range of types in a series.

The volcanic explosivity index (commonly shortened VEI) is a scale, from 0 to 8, for measuring the strength of eruptions. It is used by the Smithsonian Institution's Global Volcanism Program to assess historic and prehistoric lava flows. It works in a way similar to the Richter scale for earthquakes: each interval in value is a tenfold increase in magnitude (it is logarithmic). Most volcanic eruptions are of VEIs between 0 and 2.

All content from Kiddle encyclopedia articles (including the article images and facts) can be freely used under Attribution-ShareAlike license, unless stated otherwise. Cite this article:
Volcanic eruption Facts for Kids. Kiddle Encyclopedia.