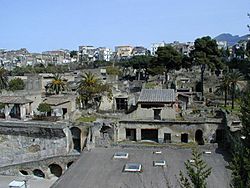 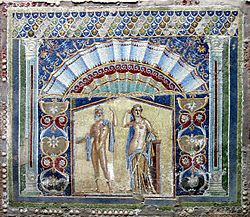 Herculaneum was an ancient Roman town. It was completely destroyed when the volcano Mount Vesuvius erupted on 24 August, 79 AD. Herculaneum was covered by volcanic mud during the eruption, which quickly hardened to a semi-rock material. Herculaneum is a UNESCO World Heritage Site.

Unlike Pompeii, the deep pyroclastic material which covered it preserved most objects in its path. Archaeologists have recovered wooden and other objects such as rooves, beds, doors, and food. Some 300 skeletons were discovered along the sea shore. It was thought until then that the town had been evacuated by its inhabitants.

Herculaneum was a wealthier town than Pompeii. It had many fine houses with a lavish use of coloured marble cladding, mosaics and wall paintings.

All content from Kiddle encyclopedia articles (including the article images and facts) can be freely used under Attribution-ShareAlike license, unless stated otherwise. Cite this article:
Herculaneum Facts for Kids. Kiddle Encyclopedia.