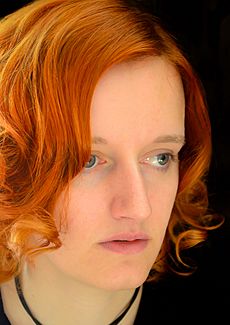 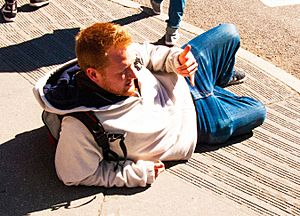 People with red hair are referred to as redheads. Natural redheads often have very light colored skin. They often also have freckles.

Red hair varies in hue from a deep burgundy or bright copper, or auburn, to burnt orange or red-orange to strawberry blond. Characterized by high levels of the reddish pigment pheomelanin and relatively low levels of the dark pigment eumelanin, it is associated with fair skin color, lighter eye color, freckles, and sensitivity to ultraviolet light. 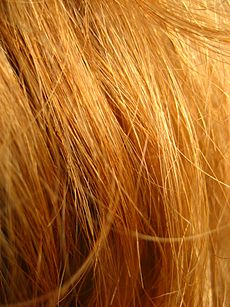 A close-up view of red hair 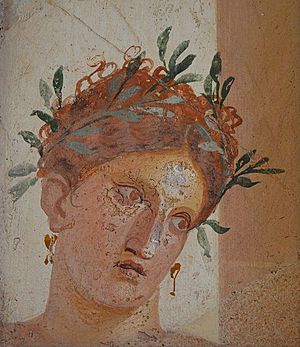 Roman fresco of a woman with red hair wearing a garland of olives, from Herculaneum, made sometime before the city's destruction in 79 AD by Mount Vesuvius (which also destroyed Pompeii).

The genetics of red hair appear to be associated with the melanocortin-1 receptor (MC1R), which is found on chromosome 16. Eighty percent of redheads have an MC1R gene variant.

Red hair is associated with fair skin color because low concentrations of eumelanin throughout the body of those with red hair caused by a MC1R mutation can cause both. The lower melanin concentration in skin confers the advantage that a sufficient concentration of important Vitamin D can be produced under low light conditions. However, when UV-radiation is strong (as in regions close to the equator) the lower concentration of melanin leads to several medical disadvantages, such as a higher risk of skin cancer. The MC1R variant gene that gives people red hair generally results in skin that is difficult or impossible to tan. Because of the natural tanning reaction to the sun's ultraviolet light and high amounts of pheomelanin in the skin, freckles are a common but not universal feature of red-haired people.

Red hair can originate from several changes on the MC1R-gene. If one of these changes is present on both chromosomes then the respective individual is likely to have red hair. This type of inheritance is described as an autosomal recessive. Even if both parents do not have red hair themselves, both can be carriers for the gene and have a redheaded child.

Genetic studies of dizygotic (fraternal) twins indicate that the MC1R gene is not solely responsible for the red hair phenotype; unidentified modifier genes exist, making variance in the MC1R gene necessary, but not sufficient, for red hair production.

All content from Kiddle encyclopedia articles (including the article images and facts) can be freely used under Attribution-ShareAlike license, unless stated otherwise. Cite this article:
Red hair Facts for Kids. Kiddle Encyclopedia.