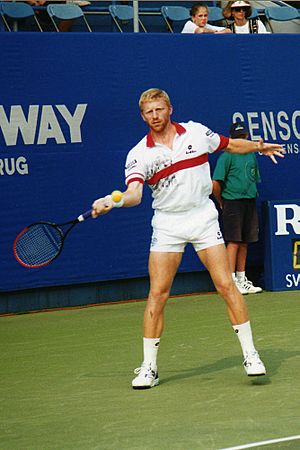 Boris Franz Becker (born 22 November 1967) is a German retired tennis player. He was born in Leimen, Germany. At the age of 17, he became the youngest ever winner at Wimbledon in 1985. He won the contest while being unseeded. That means that he had not achieved enough to be assigned within an order of the better players at the start of the tournament.

He became a very successful player, winning the Wimbledon title again in 1986. Becker also helped West Germany win its first Davis Cup in 1988. In 1989, he won the Wimbledon, the US Open and another Davis Cup.

In 1991, he reached the World number 1 ranking by winning the Australian Open. Becker defeated Jim Courier in straight sets to win the 1992 Association of Tennis Professionals Tour World title. His final Grand Slam title was in 1996, where he beat Michael Chang for another Australian Open title in four sets.

Throughout his career, Becker won 49 singles titles and 15 doubles titles. He is known for his rivalry with certain players, including Ivan Lendl, Stefan Edberg and Michael Stich.

All content from Kiddle encyclopedia articles (including the article images and facts) can be freely used under Attribution-ShareAlike license, unless stated otherwise. Cite this article:
Boris Becker Facts for Kids. Kiddle Encyclopedia.