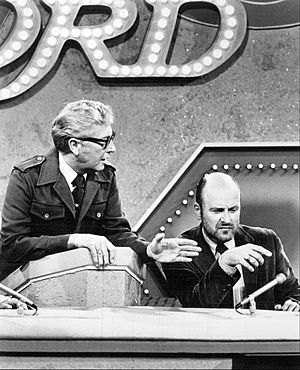 A game show in progress

A game show is a reality television program where people play a game for points, with the goal of winning money or prizes. Different game shows use different games. Some game shows involve word games, and others involve tests of skill or general knowledge. Many game shows incorporate some element of chance; for example, in Wheel of Fortune, contestants spin a wheel to determine how much prize money they get for a correct letter.

Many game shows air on the Game Show Network and other television networks.

The first game shows were on radio.

Examples of game shows include:

All content from Kiddle encyclopedia articles (including the article images and facts) can be freely used under Attribution-ShareAlike license, unless stated otherwise. Cite this article:
Game show Facts for Kids. Kiddle Encyclopedia.