Jeopardy! is an American television game show created by Merv Griffin. The show first appeared on NBC, where it was hosted by Art Fleming from March 30, 1964 to January 3, 1975 and again from October 2, 1978 to March 2, 1979. Beginning on September 10, 1984 and continuing into the present, the show is in syndicated format and is hosted by Alex Trebek. Versions of the show have been made in many foreign countries throughout the world.

Since the syndicated version premiered, the show has won the most Emmy Awards of any game show on daytime television. In 2001, TV Guide named it the second-best game show of all time.

A "Griffin Award," a trophy given to the Grand Champion Jeopardy!

The Double Jeopardy! round is like the Jeopardy! round, but the clues are worth double the amount. The Final Jeopardy! round is made up of just one category and one clue. Only players with more than $0 after the Double Jeopardy! round may play the Final Jeopardy! round. During the commercial break, players write their wagers based on their knowledge of the given category. After the commercial break, the host reads the clue. The players have 30 seconds to write their answers, again in the form of a question. During this time the lights dim, and the "Think!" theme plays in the background. The player with the most money at the end of the game keeps his or her winnings and comes back to the next show. Second-place players get a $2000 cash prize, and third place players get a $1000 cash prize. 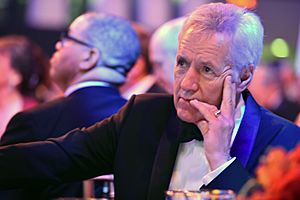 Since the show started in 1964, there were various songs and arrangements that were used as the show's main theme. Most of these were composed by Merv Griffin. The best known theme song is "Think!". It has served as the countdown music for the Final Jeopardy! round since 1964.

Beginning with the Alex Trebek hosted syndicated version in September 1984, a rendition of "Think!" served as the show's main theme. The original version of the main theme consisted of saxophones and synthesizers along with the original recording of "Think!" retained for the final segment. A swooshing sound effect was added during the show's introduction. 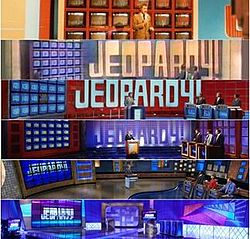 Like the theme music, the Jeopardy! set changed over the years. The original gameboard was exposed behind a curtain. The clues were printed on clue cards, which were shown as a player asked for a certain clue and its value. In 1978, the cards were dropped in favor of flipping panels which had the dollar value on one side and the clue on the other. Also, the curtain was changed to double-slide panels. When the show came back in 1984, the gameboard was changed again. This time it was made up of 30 television screens for each clue in the categories. In 1991, the original screens were changed to larger screens. In 2006, the screens were changed to a projection video wall. Then in 2009, the video wall was changed to 36 HD flat-panel screens.

Other changes to the set have been made since the start of the syndicated version. Starting in 1985 and continuing until 1997, the sets were designed to have a blue background for the Jeopardy! round and a red background for the Double Jeopardy! and Final Jeopardy! rounds; however, starting in 2005 and continuing into the present, the background color changes to red when the lights dim during Final Jeopardy! In November 1996, two months after the start of Season 13, a new set made by Naomi Slodki was brought in. In November 2002, another new set made by Slodki was brought in. This set was slightly changed in 2006 when Jeopardy! started airing in high-definition.

All content from Kiddle encyclopedia articles (including the article images and facts) can be freely used under Attribution-ShareAlike license, unless stated otherwise. Cite this article:
Jeopardy! Facts for Kids. Kiddle Encyclopedia.