George Alexander "Alex" Trebek OC (July 22, 1940 – November 8, 2020) was a Canadian-American television game show host. He is best known as the host of Jeopardy!, which he hosted from 1984 until his death. He was born in Greater Sudbury, Ontario. He became a naturalized American citizen in 1998. In 2011, he snapped his achilles tendon while trying to stop a thief trying to rob his San Francisco hotel room.

In March 2019, Trebek announced that he had been diagnosed with stage IV pancreatic cancer. He died from the disease on 8 November 2020 in Los Angeles, aged 80. 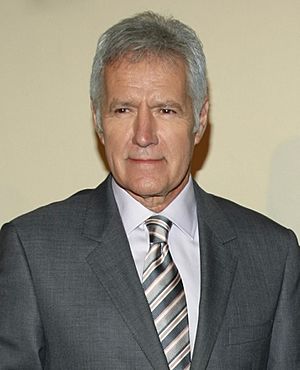 All content from Kiddle encyclopedia articles (including the article images and facts) can be freely used under Attribution-ShareAlike license, unless stated otherwise. Cite this article:
Alex Trebek Facts for Kids. Kiddle Encyclopedia.