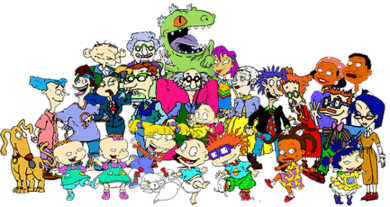 Rugrats sports a vast array of secondary and tertiary characters.

Rugrats is an American animated television programme created by Arlene Klasky, Gábor Csupó, and Paul Germain for Nickelodeon. The series originally aired from August 11, 1991 to 22 May, 1994 as Nickelodeon only commissioned 61 episodes for the show (With a holdover episode "Passover" airing on 13, April 1995) but the show was so successful in ratings for it's reruns that it began a new run that lasted from 6 December, 1996 through August 1, 2004. The show centers around four babies and the life and times of adventures through their eyes. It was the first Nicktoon and also aired on Nick Jr. in 1996.

The series main character is Pickles. He was a filmmaker since he was a baby. His group of playmates are the other characters. Chuckie Finster (2-3 years old) is Tommy's best friend. He has red hair and wears glasses. Phil and Lil DeVille are twins. They love digging for and eating insects and earthworms. Tommy, Phil and Lil appeared in the pilot episode. Spike Pickles is the Pickles family's dog.

Tommy's baby brother and other best friend is Dil. He was born in The Rugrats Movie. Angelica Pickles is Tommy's older cousin. She is the main antagonist of the program. Kimi is Chuckie's playful stepsister. She first appeared in Rugrats in Paris: The Movie. Susie Carmichael is Angelica's schoolmate and best friend.

The other characters include the babies' parents. The parents are easily distracted. This lets the children get away and explore.

In the pilot, Phil was Tommy's best friend.

Kimi first appeared in Rugrats in Paris: The Movie.

All content from Kiddle encyclopedia articles (including the article images and facts) can be freely used under Attribution-ShareAlike license, unless stated otherwise. Cite this article:
Rugrats Facts for Kids. Kiddle Encyclopedia.