The Nickelodeon Kids' Choice Awards, also known as the KCA's, is an annual awards show that shows on Nickelodeon. 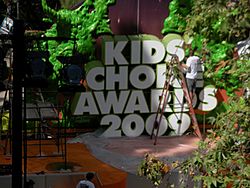 Finishing up with the "Orange Carpet" for the Kids' Choice Awards outside of Pauley Pavilion, UCLA campus

The Kids' Choice Awards are typically held in and around Southern California. Previous ceremonies have been held at the Barker Hangar in Santa Monica, California, the Hollywood Bowl, the Grand Olympic Auditorium in Los Angeles, and Universal Studios Hollywood in Universal City, but mostly at Pauley Pavilion on the UCLA campus. After renovations to Pauley beginning in 2011, the show was moved to the Galen Center at USC; it was expected to be a temporary home, but the network retained Galen for the 2012–14 ceremonies due to the construction of the Meyer and Renee Luskin Conference and Guest Center, making it difficult to have the "Orange Carpet"; the smaller Kids' Choice Sports had its first ceremony in 2014 at Pauley. For the 2015 and 2016 shows, the ceremony occurred at the remodeled Forum in Inglewood, California. Between the 2017 and 2019 shows, the venue alternated between the Galen Center and The Forum.

The 2020 ceremony was the first ceremony to be held in a virtual format, a change that was necessary in the wake of the coronavirus pandemic.

The Hall of Fame Award

The Hall of Fame Award (a gold version of the Blimp award) was presented to those whose accomplishments, fame and popularity set them above everyone else. Initially, the award was chosen by the kids from a slate of nominees. Actors, athletes and singers were all eligible for the award, with ballots containing nominees from multiple categories.

The Wannabe Award (a silver version of the Blimp award) is presented to the best celebrity role model or inspiration (or the person whom the kids want to be like). The winner is determined prior to the awards without voter input. As of 2009, the only person to have won the Wannabe award and the Hall of Fame award is Will Smith. These awards replaced the Hall of Fame awards following the show in 2000.

The Big Green Help (The Big Help) Award (originally a green-colored trophy, silver in 2012) is presented to a person who goes above and beyond to help the environment. It is based on Nickelodeon's The Big Help initiative.

The Nickelodeon Lifetime Achievement Award is presented to a network employee on or off camera that has contributed heavily to the network's success and entertained children with their work. 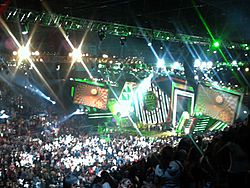 The final slime at the 2010 Kids' Choice Awards

During a ceremony, sometimes a celebrity presenter or award winner might not know when they are going to be slimed onstage or offstage, though as the years went on, getting slimed became more of an honor, and less of a comedic humiliation akin to the early Nickelodeon series You Can't Do That on Television, from whence the concept originated. Hosts of the show have also been slimed, and occasionally celebrities not attending the awards have been slimed via video segment, such as when Rosie O'Donnell tricked Melissa Joan Hart into getting slimed on the set of Sabrina the Teenage Witch in 2001, or when Amanda Seyfried and Josh Hutcherson were slimed at a KCA watch party in 2013. Celebrities sitting in the audience are also fair game for being slimed, as Mandy Moore first learned in 2007, and Halle Berry later found out in 2012.

Although Les Lye was the only celebrity to be slimed at the 1988 awards, a video was shown during the show of then Nickelodeon president Geraldine Laybourne saying the magic words and getting slimed with the original YCDTOTV recipe, much to her dismay, proving that not even the network president was safe from the slime.

Below is a list of all the celebrities that have been slimed over the past years at the Kids' Choice Awards.

All content from Kiddle encyclopedia articles (including the article images and facts) can be freely used under Attribution-ShareAlike license, unless stated otherwise. Cite this article:
Nickelodeon Kids' Choice Awards Facts for Kids. Kiddle Encyclopedia.