Elizabeth Stamatina "Tina" Fey ( born May 18, 1970) is an American actress, comedienne, writer, and producer. She has received seven Emmy Awards, three Golden Globe Awards, four Screen Actors Guild Awards, and four Writers Guild of America Awards. She was called the performer who had the greatest impact on culture and entertainment in 2008 by the Associated Press. They gave her their AP Entertainer of the Year award.

Fey graduated from the University of Virginia in 1992. She then moved to Chicago to take classes at the improvisational comedy group The Second City. She became a featured player there in 1994. Three years later, Fey became a writer for the sketch comedy show Saturday Night Live (SNL). She was promoted to the position of head writer in 1999. The following year, Fey was added to the cast of SNL. During her time there, she was co-anchor of the show's Weekend Update. After leaving SNL in 2006, she created her own television series called 30 Rock. The show is a situation comedy somewhat based on her experiences at SNL. In the show, Fey plays the head writer of a fictional sketch comedy show.

In 2004, Fey made her movie debut as writer and co-star of the teen comedy Mean Girls. In 2008, she starred in the comedy movie Baby Mama, with Amy Poehler. In 2009, Fey won an Emmy Award for her satirical portrayal of Republican vice presidential candidate Sarah Palin in a guest appearance on SNL. 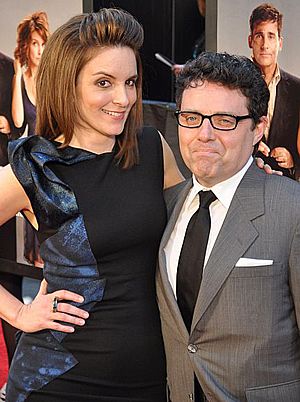 Fey and Jeff Richmond in April 2010

Fey is married to Jeff Richmond. Richmond was a composer on 30 Rock. They met at Chicago's Second City. The two dated for seven years before marrying in a Greek Orthodox ceremony on June 3, 2001. They have a daughter, Alice Zenobia Richmond, who was born on September 10, 2005, while Fey was still working at SNL. Fey returned to the show on October 22, saying "I had to get back to work. NBC has me under contract; the baby and I have only a verbal agreement." In April 2009, Fey and Richmond bought a $3.4 million apartment in the Upper West Side in New York City.

Her charity work includes support of Autism Speaks. It is a group that sponsors autism research. It hosts awareness and outreach activities aimed at families, governments, and the public. At the 64th Golden Globe Awards, Fey wore a blue puzzle piece to raise awareness for the organization. In April 2008, she participated in Night of Too Many Stars, a comedy show benefit for autism education.

Fey is also a supporter of Mercy Corps, a global relief and development organization, in their campaign to end world hunger. Fey narrated a video for Mercy Corps's Action Center in New York City, describing hunger as a symptom of many wider world problems. She also supports the Love Our Children USA organization, which fights violence against children. They named her among their Mothers Who Make a Difference in 2009. She was the 2009 national spokesperson for the Light The Night Walk, which benefits the Leukemia & Lymphoma Society.

All content from Kiddle encyclopedia articles (including the article images and facts) can be freely used under Attribution-ShareAlike license, unless stated otherwise. Cite this article:
Tina Fey Facts for Kids. Kiddle Encyclopedia.