Politics of the United States facts for kids 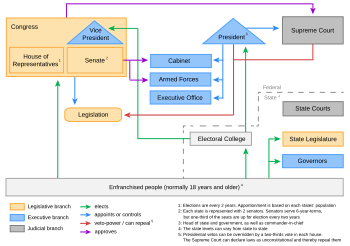 Political system of the United States

The United States is a federal constitutional republic, in which the President of the United States (the head of state and head of government), Congress, and judiciary share powers reserved to the national government, and the federal government shares sovereignty with the state governments.

The executive branch is mostly about the President and is independent of the legislature. Legislative power is rights in the two chambers of Congress, the Senate and the House of Representatives.

The judicial branch (or judiciary), made of the Supreme Court and lower federal courts, focuses on the judicial power (or judiciary). The judiciary's main focus is to change the meaning of the United States Constitution and federal laws and rules. This includes solving problems between the executive and legislative branches. The federal government's layout is explained in the Constitution.

Two political parties, the Democratic Party and the Republican Party. They have made a large difference in American politics since the American Civil War.

There are also smaller parties like the Libertarian Party, the Green Party, and the Constitution Party. The Whig Party and the Democratic-Republican Party were important many years ago.

There are major differences between the political system of the United States and that of most other developed democracies. These include greater power in the upper house of the legislature, a wider scope of power held by the Supreme Court, the separation of powers between the legislature and the executive, and the dominance of only two main parties. Third parties have less political influence in the United States than in other developed country democracies.

The federal object created by the U.S. Constitution is the main feature of the American governmental system. However, most people are also subject to a state government, and all are subject to various units of local government. The latter include counties, municipalities, and special districts.

The federal government was created by the states, which as colonies were established separately and governed themselves independently of the others. Units of local government were created by the colonies to carry out various state functions. As the country expanded, it admitted new states modeled on the existing ones.

President of the United States

The President of the United States is the head of state of the United States. They are elected by the American citizens every four years in democratic elections. They also appoint people who will work in different departments that focuses on special areas for the country.

All content from Kiddle encyclopedia articles (including the article images and facts) can be freely used under Attribution-ShareAlike license, unless stated otherwise. Cite this article:
Politics of the United States Facts for Kids. Kiddle Encyclopedia.