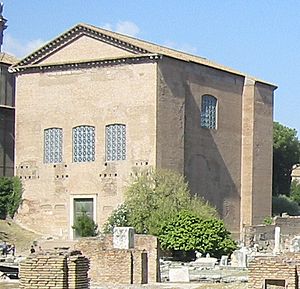 The Curia Julia in the Roman Forum

In a modern democracy, a senate is a group of people who are part of a legislature. A legislature passes or changes laws for their country, state, or other area. Members of a senate are called senators. Some legislatures are Bicameral, meaning they have two groups of people (working in separate places) called houses. A senate can be called a House of Senators. The other house of such legislatures is called a House of Representatives, House of Commons, or Assembly. In such legislatures, both houses must pass the same bill to make it a law. Modern democratic systems having legislatures with senates include the United States of America (U. S.), Canada, Australia and many states in the United States.

The first ever senate was the Roman Senate. The name comes from their word for "elder".

Senate is also the name of the ruling body of some universities.

All content from Kiddle encyclopedia articles (including the article images and facts) can be freely used under Attribution-ShareAlike license, unless stated otherwise. Cite this article:
Senate Facts for Kids. Kiddle Encyclopedia.