Marcus Tullius Cicero was a Roman politician and lawyer, who served as consul in the year 63 BC. He came from a wealthy municipal family of the Roman equestrian order, and is considered one of Rome's greatest orators and prose stylists.

His influence on the Latin language was so immense that the subsequent history of prose, not only in Latin but in European languages up to the 19th century, was said to be either a reaction against or a return to his style. According to Michael Grant, "the influence of Cicero upon the history of European literature and ideas greatly exceeds that of any other prose writer in any language". His Latin is thought to be the model of Classical Latin. He introduced Greek philosophy to the Romans.

Though he was an accomplished orator and successful lawyer, Cicero believed his political career was his most important achievement.

Following Julius Caesar's death, Cicero became an enemy of Mark Antony in the ensuing power struggle, attacking him in a series of speeches. He was proscripted as an enemy of the state by the Second Triumvirate and consequently executed by soldiers operating on their behalf in 43 BC after having been intercepted during attempted flight from the Italian peninsula. Cicero's last words are said to have been, "There is nothing proper about what you are doing, soldier, but do try to kill me properly."

Cicero has been traditionally considered the master of Latin prose, with Quintilian declaring that Cicero was "not the name of a man, but of eloquence itself." The English words Ciceronian (meaning "eloquent") and cicerone (meaning "local guide") derive from his name. He is credited with transforming Latin from a modest utilitarian language into a versatile literary medium capable of expressing abstract and complicated thoughts with clarity. Julius Caesar praised Cicero's achievement by saying "it is more important to have greatly extended the frontiers of the Roman spirit (ingenium) than the frontiers of the Roman empire". According to John William Mackail, "Cicero's unique and imperishable glory is that he created the language of the civilized world, and used that language to create a style which nineteen centuries have not replaced, and in some respects have hardly altered." 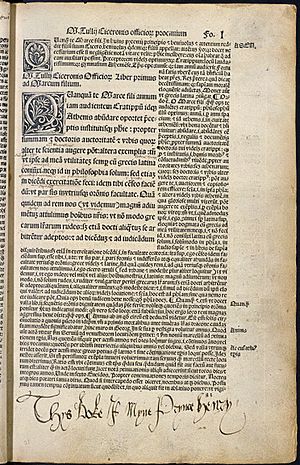 While Cicero the humanist deeply influenced the culture of the Renaissance, Cicero the republican inspired the Founding Fathers of the United States and the revolutionaries of the French Revolution. John Adams said, "As all the ages of the world have not produced a greater statesman and philosopher united than Cicero, his authority should have great weight." Jefferson names Cicero as one of a handful of major figures who contributed to a tradition “of public right” that informed his draft of the Declaration of Independence and shaped American understandings of "the common sense" basis for the right of revolution.

Jim Powell starts his book on the history of liberty with the sentence: "Marcus Tullius Cicero expressed principles that became the bedrock of liberty in the modern world."

Cicero's letters to and from various public and private figures are considered some of the most reliable sources of information for the people and events surrounding the fall of the Roman Republic. While 37 books of his letters have survived into modern times, 35 more books were known to antiquity that have since been lost. These included letters to Caesar, to Pompey, to Octavian, and to his son Marcus.

All content from Kiddle encyclopedia articles (including the article images and facts) can be freely used under Attribution-ShareAlike license, unless stated otherwise. Cite this article:
Cicero Facts for Kids. Kiddle Encyclopedia.