Pompey, Pompey the Great, (Gnaeus Pompeius Magnus, 29 September 106 BC–28 September 48 BC), was an important military and political leader of the late Roman Republic.

Coming from an Italian provincial background, he got a place for himself in the ranks of Roman nobility, and was given the nickname of the Great by Lucius Cornelius Sulla.

Pompey was a rival of Marcus Licinius Crassus and an ally to Gaius Julius Caesar. The three politicians would dominate the Late Roman republic through a political alliance called the First Triumvirate. After the death of Crassus, Pompey and Caesar disputed the leadership of the Roman Republic. Pompey was decisively beaten by Caesar at the Battle of Pharsalus. 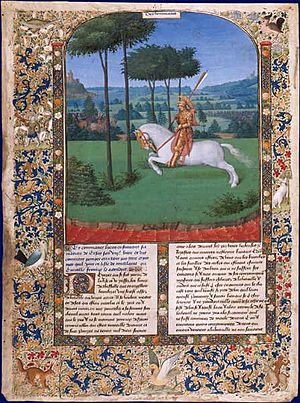 The Flight of Pompey after Pharsalus, by Jean Fouquet

In the beginning, Pompey said he could defeat Caesar and raise armies merely by stamping his foot on the soil of Italy, but in the spring of 49 BC, Caesar crossed the Rubicon and his legions swept down the peninsula. Pompey abandoned Rome, and took his legions south towards Brundisium. Pompey intended build up his army, and wage war against Caesar in the east. Neither Pompey nor the Senate thought of taking the vast treasury with them, probably thinking Caesar would not dare take it for himself. It was left in the Temple of Saturn when Caesar and his forces entered Rome.

Barely escaping Caesar in Brundisium, Pompey crossed over into Epirus. There, during Caesar's Spanish campaign, Pompey had gathered a large force in Macedonia, with nine legions plus contingents from the Roman allies in the east. His fleet controlled the Adriatic. Nevertheless, Caesar managed to cross over into Epirus in November 49 BC, and captured Apollonia.

Pompey fought Caesar at the Battle of Dyrrhachium (48 BC), in which Caesar lost 1000 men and Pompey lost 2000. Because he failed to pursue at the moment of Caesar's defeat, Pompey threw away the chance to destroy Caesar's much smaller army. As Caesar himself said, "Today the enemy would have won, if they had a commander who was a winner" (Plutarch, 65).

According to Suetonius, it was at this point that Caesar said that "that man (Pompey) does not know how to win a war". With Caesar on their backs, the conservatives led by Pompey fled to Greece. Caesar and Pompey had their final showdown at the Battle of Pharsalus in 48 BC. The fighting was bitter for both sides, and although Pompey was expected to win, due to advantage in numbers, the brilliant tactics and the superior fighting abilities of Caesar's veterans led to a victory for Caesar. Pompey met his wife Cornelia and his son Sextus Pompeius on the island of Mytilene. He then wondered where to go next. He ran to Egypt.

After he got to Egypt, Pompey's fate was decided by the advisors of the young king Ptolemy XIII. While Pompey waited offshore, they argued the cost of offering him refuge with Caesar already en route to Egypt; the king's eunuch Pothinus won out. According to Plutarch, Cornelia watched anxiously from the trireme as Pompey left in a small boat with a few comrades, and headed for a welcoming party on the Egyptian shore. As Pompey got off the boat, he was stabbed to death by men following the orders of Pothinus.

Pompey died one day after his 59th birthday. His body remained on the shoreline, to be cremated by his loyal freeman Philip on the rotten planks of a fishing boat. His head and seal were presented to Caesar, who, according to Plutarch, mourned this insult to the greatness of his former ally. Caesar punished his assassins and their Egyptian co-conspirators, putting both Achillas and Pothinus to death. Pompey's ashes were eventually returned to Cornelia, who carried them to his country house near Alba.

Cassius Dio describes Caesar's reactions with scepticism. He thinks Pompey's own political misjudgements, rather than treachery, was the cause of his downfall. In Appian's account of the civil war, Caesar has Pompey's severed head buried in Alexandria, in ground reserved for a new temple to the goddess Nemesis. The divine functions of Nemesis (~fate) included the punishment of hubris (pride). For Pliny, the humiliation of Pompey's end is contrasted to his oversized portrait-head, studded with pearls, and carried in procession during his greatest Triumph.

All content from Kiddle encyclopedia articles (including the article images and facts) can be freely used under Attribution-ShareAlike license, unless stated otherwise. Cite this article:
Pompey Facts for Kids. Kiddle Encyclopedia.