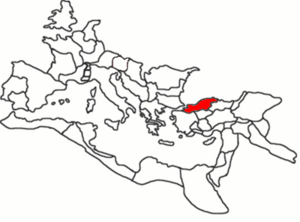 Bithynia as a province of the Roman Empire, 120 AD

Bithynia was an old kingdom of a Roman province in the northwest of Asia Minor. It was at the coast of the Black Sea. It was named after the Bithyni, a tribe that moved there from Thrace. It was an important territory for the Roman empire. Bithynia was also the site of early Christian activities in the first and second centuries AD.

All content from Kiddle encyclopedia articles (including the article images and facts) can be freely used under Attribution-ShareAlike license, unless stated otherwise. Cite this article:
Bithynia Facts for Kids. Kiddle Encyclopedia.