Mulberry (Morus) is a genus of 10–16 species of trees. They are native to warm regions of Asia, Africa and the Americas, with most of the species native to Asia.

Mulberries are fast-growing when young, but soon become slow-growing and rarely grow over 10-15 meters tall. The leaves are simple, often lobed, and ridged. The fruit grows in bunches, 2-3 centimeters long, is red to dark purple in color, edible, and sweet with a good flavor in several species.

Mulberries can be grown from seeds, and this is the best idea as seedling-grown trees are generally healthier. However, they are most often planted from large pieces cut from other Mulberry trees, which easily take root.

Mulberry leaves, particularly those of the White Mulberry, Morus alba, are important as food of the silkworm, the cocoon of which is used to make silk. Morus alba is also notable for the rapid release of its pollen, which is launched at over half the speed of sound. "This is the fastest motion yet observed in biology, and approaches the theoretical physical limits for movements in plants." 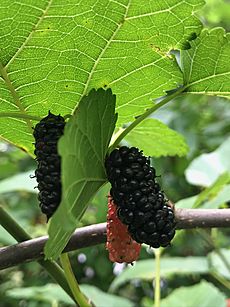 The fruit of the white mulberry has a different flavor, sometimes characterized as refreshing and a little tart, with a bit of gumminess to it and a hint of vanilla. In North America, the white mulberry is considered an invasive exotic and has taken over extensive tracts from native plant species, including the red mulberry.

The ripe fruit is edible and is widely used in pies, tarts, wines, cordials, and herbal teas. The fruit of the black mulberry (native to southwest Asia) and the red mulberry (native to eastern North America) have the strongest flavor, which has been likened to 'fireworks in the mouth'.

The fruit and leaves are sold in various forms as nutritional supplements. The mature plant contains significant amounts of resveratrol, particularly in stem bark. Unripe fruit and green parts of the plant have a white sap that may be toxic, stimulating, or mildly hallucinogenic. 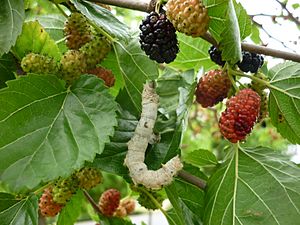 A silkworm, Bombyx mori, feeding on a mulberry tree

Mulberry leaves, particularly those of the white mulberry, are ecologically important as the sole food source of the silkworm (Bombyx mori, named after the mulberry genus Morus), the cocoon of which is used to make silk. The wild silk moth also eats mulberry. Other Lepidoptera larvae—which include the common emerald, lime hawk-moth, sycamore moth, and fall webworm—also eat the plant.

Mulberry fruit color derives from anthocyanins. Anthocyanins are responsible for the attractive colors of fresh plant foods, including orange, red, purple, black, and blue. These colors are water-soluble and easily extractable, yielding natural food colorants. Due to a growing demand for natural food colorants, their significance in the food industry is increasing.

During the Angkorian age of the Khmer Empire of Southeast Asia, monks at Buddhist temples made paper from the bark of mulberry trees. The paper was used to make books, known as kraing. 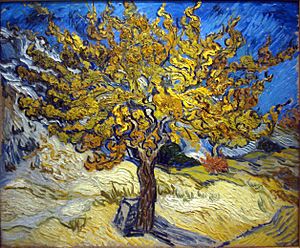 All content from Kiddle encyclopedia articles (including the article images and facts) can be freely used under Attribution-ShareAlike license, unless stated otherwise. Cite this article:
Mulberry Facts for Kids. Kiddle Encyclopedia.