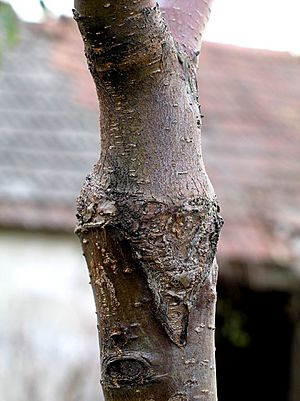 Consolidated V-graft, on an cherry tree.

Grafting or graftage is a technique used in horticulture that consists of taking tissues from one plant and putting them onto another plant. The two plants will then grow together. The technique is a type of vegetative reproduction. Grafting is commonly used with roses, and fruit trees. It only works with dicots and gymnosperms, and not with monocots. Monocots do not have a vascular cambium, which is needed for the process to work. There are several different methods of grafting; each method has its advantages and drawbacks.

Approach grafting or inarching is used to join together plants that are otherwise difficult to join. The plants are grown close together, and then joined so that each plant has roots below and growth above the point of union. Both scion and stock retain their respective parents that may or may not be removed after joining. Also used in pleaching. The graft can be successfully accomplished any time of year.

Bud grafting (also called chip budding) uses a bud instead of a twig. Grafting roses is the most common example of bud grafting. In this method a bud is removed from the parent plant, and the base of the bud is inserted beneath the bark of the stem of the stock plant from which the rest of the shoot has been cut. Any extra bud that starts growing from the stem of the stock plant is removed. Examples: roses and fruit trees like peaches.

Budwood is a stick with several buds on it that can be cut out and used for bud grafting. It is a common method of propagation for citrus trees. 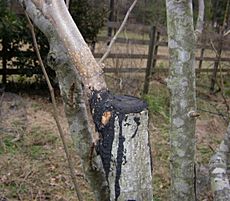 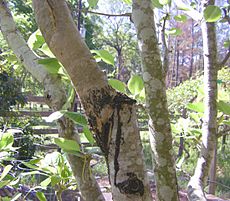 In cleft grafting a small cut is made in the stalk and then the pointed end of the scion is inserted in the stalk. The most common form of grafting is cleft grafting. This is best done in the spring and is useful for joining a thin scion about 1 cm (3⁄8 in) diameter to a thicker branch or stock. It is best if the latter is 2–7 cm (3⁄4–2 3⁄4 in) in diameter and has 3–5 buds. The branch or stock should be split carefully down the middle to form a cleft about 3 cm (1 1⁄8 in) deep. If it is a branch that is not vertical then the cleft should be cut horizontally. The end of the scion should be cut cleanly to a long shallow wedge, preferably with a single cut for each wedge surface, and not whittled. A third cut may be made across the end of the wedge to make it straight across.

Slide the wedge into the cleft so that it is at the edge of the stock and the centre of the wedge faces are against the cambium layer between the bark and the wood. It is preferable if a second scion is inserted in a similar way into the other side of the cleft. This helps to seal off the cleft. Tape around the top of the stock to hold the scion in place and cover with grafting wax or sealing compound. This stops the cambium layers from drying out and also prevents the ingress of water into the cleft. 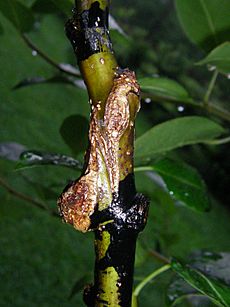 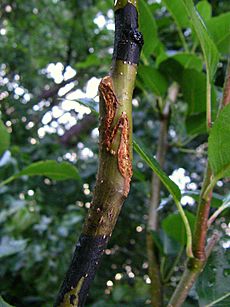 In whip grafting the scion and the stock are cut slanting and then joined. The grafted point is then bound with tape and covered with soft wax to prevent dehydration and infection by germs. Also known as the whip and tongue graft, this is considered the most difficult to master but has the highest rate of success as it offers the most cambium contact between the scion and the stock. It is the most common graft used in top-dressing commercial fruit trees. It is generally used with stock less than 1.25 cm (1⁄2 in) diameter, with the ideal diameter closer to 1 cm (3⁄8 in) and the scion should be of roughly the same diameter as the stock.

The stock is cut through on one side only at a shallow angle with a sharp knife. (If the stock is a branch and not the main trunk of the rootstock then the cut surface should face outward from the centre of the tree.) The scion is similarly sliced through at an equal angle starting just below a bud, so that the bud is at the top of the cut and on the other side than the cut face.

A notch is cut downwards into the sliced face of the stock and a similar cut upwards into the face of the scion cut. These act as the tongues and it requires some skill to make the cuts so that the scion and the stock marry up neatly. The joint is then taped around and treated with tree-sealing compound or grafting wax.

The elongated "Z" shape adds strength, removing the need for a companion rod in the first season (see illustration). 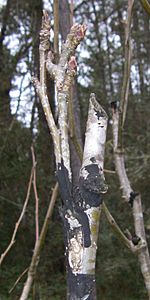 Stub grafting is a technique that requires less stock than cleft grafting, and retains the shape of a tree. Also scions are generally of 6-8 buds in this process.

An incision is made into the branch 1 cm (3⁄8 in) long, then the scion is wedged and forced into the branch. The scion should be at an angle of at most 35° to the parent tree so that the crotch remains strong. The graft is covered with grafting compound.

After the graft has taken, the branch is removed and treated a few centimeters above the graft, to be fully removed when the graft is strong.

The four-flap graft (also called banana graft) is commonly used for pecans, and first became popular with this species in Oklahoma in 1975. It is heralded for maximum cambium overlap, but is a complex graft. It requires similarly sized diameters for the rootstock and scion. The bark of the rootstock is sliced and peeled back in four flaps, and the hardwood is removed, looking somewhat like a peeled banana. It is a difficult graft to learn.

Awl grafting takes the least resources and the least time. It is best done by an experienced grafter, as it is possible to accidentally drive the tool too far into the stock, reducing the scion's chance of survival. Awl grafting can be done by using a screwdriver to make a slit in the bark, not penetrating the cambium layer completely. Then inset the wedged scion into the incision.

Veneer grafting, or inlay grafting, is a method used for stock larger than 3 cm (1 1⁄8 in) in diameter. The scion is recommended to be about as thick as a pencil. Clefts are made of the same size as the scion on the side of the branch, not on top. The scion end is shaped as a wedge, inserted, and wrapped with tape to the scaffolding branches to give it more strength. 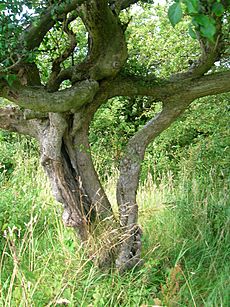 Tree branches and more often roots of the same species will sometimes naturally graft; this is called inosculation. The bark of the tree may be stripped away when the roots make physical contact with each other, exposing the vascular cambium and allowing the roots to graft together. A group of trees can share water and mineral nutrients via root grafts, which may be advantageous to weaker trees, and may also form a larger rootmass as an adaptation to promote fire resistance and regeneration as exemplified by the California black oak (Quercus kelloggii). Additionally, grafting may protect the group from wind damages as a result of the increased mechanical stability provided by the grafting. Albino redwoods use root grafting as a form of plant parasitism of normal redwoods.

A problem with root grafts is that they allow transmission of certain pathogens, such as Dutch elm disease. Inosculation also sometimes occurs where two stems on the same tree, shrub or vine make contact with each other. This is common in plants such as strawberries and potato.

Natural grafting is rarely seen in herbaceous plants as those types of plants generally have short-lived roots with little to no secondary growth in the vascular cambium.

All content from Kiddle encyclopedia articles (including the article images and facts) can be freely used under Attribution-ShareAlike license, unless stated otherwise. Cite this article:
Grafting Facts for Kids. Kiddle Encyclopedia.