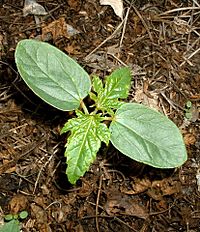 From the 1990s onwards, molecular phylogeny showed what botanists already suspected: dicotyledons are not a monophyletic group. They are a number of lineages, such as the magnoliids. Groups now known as basal angiosperms diverged earlier than the monocots did. The traditional dicots are a paraphyletic group. The largest clade of the dicotyledons are known as the eudicots. They are definitely monophyletic. They are distinguished from all other flowering plants by the structure of their pollen. Other dicotyledons and monocotyledons have an older type of pollen, whereas eudicots have derived pollen.

Apart from cotyledon number, there are other differences between monocots and dicots. These are differences mainly between monocots and eudicots. Many early-diverging dicot groups have "monocot" characteristics such as scattered vascular bundles, trimerous flowers, and old-type pollen. Also, some monocots have dicot characteristics such as reticulated leaf veins.

All content from Kiddle encyclopedia articles (including the article images and facts) can be freely used under Attribution-ShareAlike license, unless stated otherwise. Cite this article:
Dicotyledon Facts for Kids. Kiddle Encyclopedia.