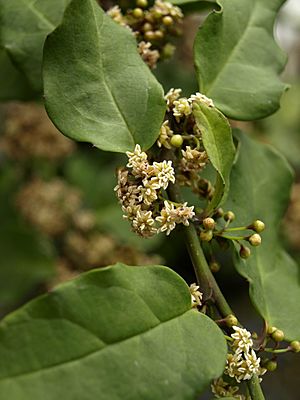 Amborella trichopoda is a small, evergreen shrub. It occurs only in the moist, shaded understory of montane forests on the South Pacific island of New Caledonia. The genus is the only member of the family Amborellaceae and contains only this single species.

Amborella is of great interest to plant systematists because molecular phylogenetic analyses put it at or near the base of the flowering plant lineage.

Since Amborella is apparently basal among the flowering plants, the features of early flowering plants can be inferred. This is done by comparing derived traits shared by other angiosperms but not present in Amborella. These traits are assumed to have evolved after the divergence of the Amborella lineage.

All content from Kiddle encyclopedia articles (including the article images and facts) can be freely used under Attribution-ShareAlike license, unless stated otherwise. Cite this article:
Amborella Facts for Kids. Kiddle Encyclopedia.