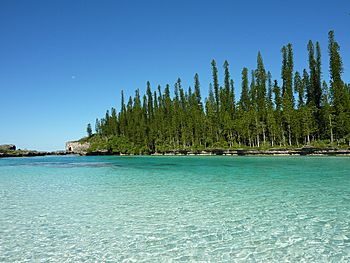 New Caledonia (French: Nouvelle-Calédonie; popular name: Le caillou) is a "sui generis collectivity" (in practice an overseas territory) of France, made up of a main island (Grande Terre) and several smaller islands. It is in the region of Melanesia in the southwest Pacific.

At the 2004 census, 230,789 people lived there. It has an internet country code top-level domain (ccTLD) of .nc. The capital and largest city of the territory is Nouméa.

The currency is the CFP franc. 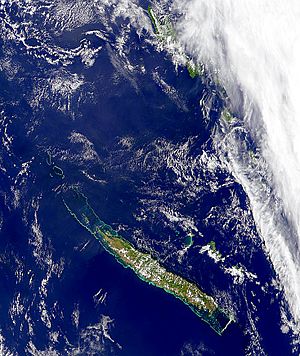 New Caledonia is part of Zealandia, a fragment of the ancient Gondwana super-continent. It is speculated that New Caledonia separated from Australia roughly 66 million years ago, subsequently drifting in a north-easterly direction, reaching its present position about 50 million years ago.

The mainland is divided in length by a central mountain range whose highest peaks are Mont Panié (1,629 metres (5,344 ft)) in the north and Mont Humboldt (1,618 m (5,308 ft)) in the southeast. The east coast is covered by a lush vegetation. The west coast, with its large savannahs and plains suitable for farming, is a drier area. Many ore-rich massifs are found along this coast.

The Diahot River is the longest river of New Caledonia, flowing for some 100 kilometres (62 mi). It has a catchment area of 620 km2 (240 sq mi) and opens north-westward into the Baie d'Harcourt, flowing towards the northern point of the island along the western escarpment of the Mount Panié. Most of the island is covered by wet evergreen forests, while savannahs dominate the lower elevations. The New Caledonian lagoon, with a total area of 24,000 square kilometres (9,300 sq mi) is one of the largest lagoons in the world. It is surrounded by the New Caledonia Barrier Reef.

The climate is tropical, with a hot and humid season from November to March with temperatures between 27 °C and 30 °C, and a cooler, dry season from June to August with temperatures between 20 °C and 23 °C, linked by two short interstices. The tropical climate is strongly moderated by the oceanic influence and the trade winds that attenuate humidity, which can be close to 80%. The average annual temperature is 23 °C, with historical extremes of 2.3 °C and 39.1 °C.

The rainfall records show that precipitation differs greatly within the island. The 3,000 millimetres (120 in) of rainfall recorded in Galarino are three times the average of the west coast. There are also dry periods, because of the effects of El Niño. Between December and April, tropical depressions and cyclones can cause winds to exceed a speed of 100 kilometres per hour (62 mph), with gusts of 250 kilometres per hour (160 mph) and very abundant rainfall. The last cyclone affecting New Caledonia was Cyclone Cook, in January 2017. 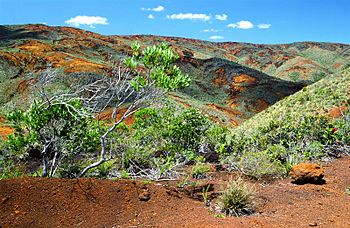 New Caledonia has many unique taxa, especially birds and plants. It has the richest diversity in the world per square kilometre. In its botany not only species but entire genera and even families are unique to the island, and survive nowhere else. The biodiversity is caused by Grande Terre's central mountain range, which has created a variety of niches, landforms and micro-climates where endemic species thrive.

Bruno Van Peteghem was in 2001 awarded the Goldman Environmental Prize for his efforts on behalf of the Caledonian ecological protection movement in the face of "serious challenges" from Jacques Lafleur's RPCR party. Progress has been made in a few areas in addressing the protection of New Caledonia's ecological diversity from fire, industrial and residential development, unrestricted agricultural activity and mining (such as the judicial revocation of INCO's mining license in June 2006 owing to claimed abuses). 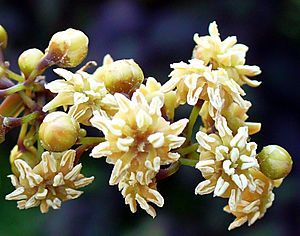 New Caledonia's fauna and flora derive from ancestral species isolated in the region when it broke away from Gondwana many tens of millions of years ago. Not only endemic species have evolved here, but entire genera and even families are unique to the islands.

The world's largest extant species of fern, Cyathea intermedia, also is endemic to New Caledonia. It is very common on acid ground, and grows about one meter (yard) per year on the east coast, usually on fallow ground or in forest clearings. There also are other species of Cyathea, notably Cyathea novae-caledoniae.

New Caledonia also is one of five regions on the planet where species of southern beeches (Nothofagus) are indigenous; five species are known to occur here.

New Caledonia has its own version of maquis (maquis minier) occurring on metalliferous soils, mostly in the south. The soils of ultramafic rocks (mining terrains) have been a refuge for many native flora species which are adapted to the toxic mineral content of the soils, to which most foreign species of plants are poorly suited, which has therefore prevented invasion into the habitat or displacement of indigenous plants. 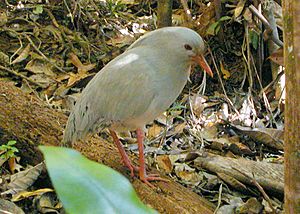 The kagu, an endemic flightless bird

New Caledonia is home to the New Caledonian crow, a bird noted for its tool-making abilities, which rival those of primates. These crows are renowned for their extraordinary intelligence and ability to fashion tools to solve problems, and make the most complex tools of any animal yet studied apart from humans.

The endemic kagu, agile and able to run quickly, is a flightless bird, but it is able to use its wings to climb branches or glide. It is the surviving member of monotypic family Rhynochetidae, order Gruiformes.

There are 11 endemic fish species and 14 endemic species of decapod crustaceans in the rivers and lakes of New Caledonia. Some, such as Neogalaxias, exist only in small areas. The nautilus—considered a living fossil and related to the ammonites, which became extinct at the end of the Mesozoic era—occurs in Pacific waters around New Caledonia. There is a large diversity of marine fish in the surrounding waters, which are within the extents of the Coral Sea.

Several species of New Caledonia are remarkable for their size: Ducula goliath is the largest extant species of pigeon; Rhacodactylus leachianus, the largest gecko in the world; Phoboscincus bocourti the largest skink in the world, thought to be extinct but rediscovered in 2003. 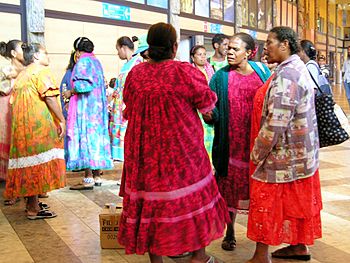 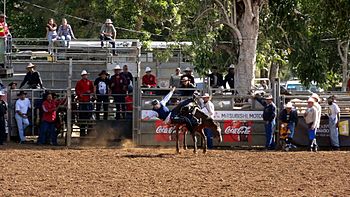 Rodeos (here at the annual fair of Bourail) are part of Caldoche culture.

The Kanak people, part of the Melanesian group, are indigenous to New Caledonia. Their social organization is traditionally based around clans, which identify as either "land" or "sea" clans, depending on their original location and the occupation of their ancestors. According to the 2009 census, the Kanak constitute 94% of the population in the Loyalty Islands Province, 74% in the North Province and 27% in the South Province. The Kanak tend to be of lower socio-economic status than the Europeans and other settlers.

Europeans first settled in New Caledonia when France established a penal colony on the archipelago. Once the prisoners had completed their sentences, they were given land to settle. According to the 2009 census, of the 71,721 Europeans in New Caledonia 32,354 were native-born, 33,551 were born in other parts of France, and 5,816 were born abroad. The Europeans are divided into several groups: the Caldoches are usually defined as those born in New Caledonia who have ancestral ties that span back to the early French settlers. They often settled in the rural areas of the western coast of Grande Terre, where many continue to run large cattle properties. 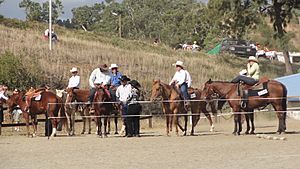 Wood carving, especially of the houp (Montrouziera cauliflora), is a contemporary reflection of the beliefs of the traditional tribal society, and includes totems, masks, chambranles, or flèche faîtière, a kind of arrow that adorns the roofs of Kanak houses. Basketry is a craft widely practiced by tribal women, creating objects of daily use.

The Jean-Marie Tjibaou Cultural Centre, designed by Italian architect Renzo Piano and opened in 1998, is the icon of the Kanak culture.

The Kaneka is a form of local music, inspired by reggae and originating in the 1980s.

The Mwâ Ka is a 12m totem pole commemorating the French annexation of New Caledonia, and was inaugurated in 2005.

All content from Kiddle encyclopedia articles (including the article images and facts) can be freely used under Attribution-ShareAlike license, unless stated otherwise. Cite this article:
New Caledonia Facts for Kids. Kiddle Encyclopedia.