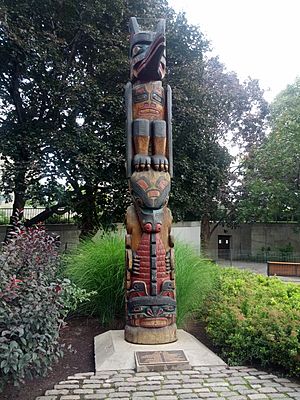 A totem pole in Ontario

Totemism is a belief about the relationship between people and nature. The term totem comes from an Ojibwe word meaning “a relative of mine”. It was first written about in 1791 by a trader, James Long. It has been recorded across native tribes of America, Africa and Australia. It has been the subject of much research into ethnic groups. Usually, totems of a kinship group will be animals or plants. They will be represented in sacred objects and will belong exclusively to them.

Totemism was considered a primitive religion by many European thinkers in the 1800s. It was thought to be related to beliefs about food and taboos. In 1869, John Ferguson McLennan said that "there is no race of men that has not come through this primitive stage of speculative belief". Early thinkers had the idea that beliefs in totemism came from indiginous clans being uneducated about the difference between humans and animals. This is not still talked about as true in modern discussions on totemism.

Totem poles are carved with symbols on large trees, mostly cedar or spruce, by native northwest North American clans. Totem poles are also found in Alaska. They are not for worship, but early missionaries had them burned down. This was a mistake because the poles just tell stories about the clan they belong to. Eagles or ravens are carved at the highest level. Lower down the pole are carved beavers, foxes, bears and frogs. A carving of a person is located on top. He is the watchman, who warns about approaching danger in the village.

Émile Durkheim said in 1915 that totemism was just a way of thinking about groups in society. Durkheim decided this because he spent time working with Aboriginal Australian clans. Each clan had its own totem, which could be any natural feature such as animals, plants or rivers. These totems and symbols of them were worshiped and protected. This was because only as long as the totem was healthy would the clan stay healthy. Durkheim decided that the worship of the totems was a type of self-worship for the clan.

Claude Lévi-Strauss published Totemism in 1962. In this book he says that totemism is a way that humans tend to classify people into similar groups. Once a population has made rules likeexogamy (not marrying outside the group) it becomes important to keep the clan different from others. But humans themselves do not have different features like wolves or birds do, so giving the identity of an animal to the clan makes its member distinctly different. This makes social boundaries.

All content from Kiddle encyclopedia articles (including the article images and facts) can be freely used under Attribution-ShareAlike license, unless stated otherwise. Cite this article:
Totemism Facts for Kids. Kiddle Encyclopedia.