Kids Encyclopedia Facts
This page is about the anthropologist. For the maker of clothes, see Levi Strauss.

Claude Lévi-Strauss ( 28 November 1908 – 30 October 2009) was a French anthropologist and ethnologist whose work was key in the development of the theory of structuralism and structural anthropology. He held the chair of Social Anthropology at the Collège de France between 1959 and 1982 and was elected a member of the Académie française in 1973. He received numerous honors from universities and institutions throughout the world and has been called, alongside James George Frazer and Franz Boas, the "father of modern anthropology".

Lévi-Strauss argued that the "savage" mind had the same structures as the "civilized" mind and that human characteristics are the same everywhere. These observations culminated in his famous book Tristes Tropiques that established his position as one of the central figures in the structuralist school of thought. As well as sociology, his ideas reached into many fields in the humanities, including philosophy. Structuralism has been defined as "the search for the underlying patterns of thought in all forms of human activity."

In 2008, he became the first member of the Académie française to reach the age of 100 and one of the few living authors to have his works published in the Bibliothèque de la Pléiade.

He died on 30 October 2009, a few weeks before his 101st birthday. The death was announced four days later.

French President Nicolas Sarkozy described him as "one of the greatest ethnologists of all time". Bernard Kouchner, the French Foreign Minister, said Lévi-Strauss "broke with an ethnocentric vision of history and humanity [...] At a time when we are trying to give meaning to globalisation, to build a fairer and more humane world, I would like Claude Lévi-Strauss's universal echo to resonate more strongly". 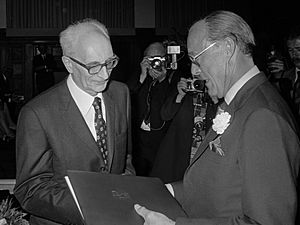 All content from Kiddle encyclopedia articles (including the article images and facts) can be freely used under Attribution-ShareAlike license, unless stated otherwise. Cite this article:
Claude Lévi-Strauss Facts for Kids. Kiddle Encyclopedia.