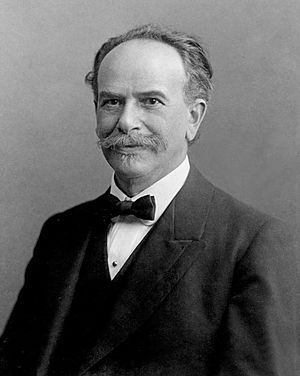 Franz Boas (July 9, 1858 – December 21, 1942) was a German born American anthropologist. He is considered by many to have been the 'Father of American Anthropology.' While today archaeology, cultural anthropology , linguistics, and Biological anthropology are often considered somewhat separate discipline, Boas had a holistic approach, meaning to him they were a unified discipline.

Boas was born in Germany to Jewish parents. His parents were rich, well educated, and sought to expose him to the values of the enlightenment. This resulted in Boas did not identifying as Jewish, and left him with a dislike of religion. Because of parents, he received a very strong early education. Boas studied natural history in primary school, and in secondary school he researched the natural range of plants.

Franz Boas attended Heidelberg University for one semester, before transferring to Bonn University where he studied mathematics, physics, and geography.

He received a doctorate in physics in 1881 from the University of Kiel. By today's standards Boas' doctorate would be closer to a degree in geography than physics.

Boas first traveled to Baffin Island in 1883 to study the native Inuit to see what role the environment plays in their migrations. He published his findings in 1888. Boas returned to Germany for a time, but due to rising antisemitism he decided to emigrate to the United States. He worked as an editor for Science and as a docent of anthropology at Clark University. He left the university in 1892. He went north to collect ethnographic material for the 1893 World's Colombian Exposition. After the exposition the material was given to the Field museum in Chicago, here Boas became the curator for anthropology. During this time Boas became involved in the Fin de Siècle debates. It was here he argued for separating natural sciences from the humanities. He also began the ground work that would eventually grow into historical particularism: the idea that every aspect of a culture has a unique history.

Boas eventually settled at the University of Colombia in 1896, creating the very first PhD program for anthropology in the United States. It was here where he taught his most famous students, which included: Alfred Kroeber, Ruth Benedict, Margaret Mead, Edward Sapir, and Zora Neale Hurston.

Franz Boas was censored by the American Anthropological Association (AAA) in December of 1919 for a publication he wrote denouncing anthropologists who became involved with the war effort during the First World War. This persisted for the remainder of his life, not being reversed until 2005. He was very critical of Nazism as well as critical of the radical the war effort in the United States. Boas was also involved with combating racism. In 1963 Thomas Gossett claimed that "It is possible that Boas did more to combat race prejudice than any other person in history." Franz Boas died of a stroke on December 21, 1942.  According to legend he died in the arms of none other than Claude Levi-Strauss.

Franz Boas is often credited with the development of 'historical particularism', as well as 'cultural relativism.' Boas was a founding member of the American Anthropology Association (AAA) and served as one of the organization's first vice presidents.

All content from Kiddle encyclopedia articles (including the article images and facts) can be freely used under Attribution-ShareAlike license, unless stated otherwise. Cite this article:
Franz Boas Facts for Kids. Kiddle Encyclopedia.