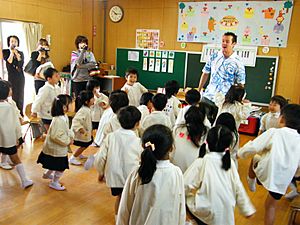 A kindergarten in Japan on Japanese Parents' Day

Kindergarten, literally meaning 'garden for the children is a preschool educational approach based on playing, singing, practical activities such as drawing, and social interaction as part of the transition from home to school.

Such institutions were originally created in the late 18th century in Bavaria and Strasbourg to serve children whose parents both worked outside home. The term was coined by the German Friedrich Fröbel, whose approach globally influenced early-years education. Today, the term is used in many countries to describe a variety of educational institutions and learning spaces based on a variety of teaching methods. 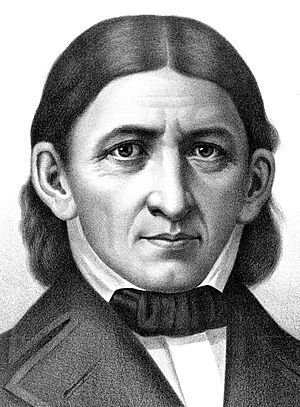 Friedrich Fröbel was one of the most influential founders of kindergartens

Friedrich Fröbel (1782–1852) opened a "play and activity" institute in 1837 in the village of Bad Blankenburg as an experimental social experience for children entering school. He renamed his institute Kindergarten on June 28, 1840, reflecting his belief that children should be nurtured and nourished, like plants in a garden.

Women trained by Fröbel opened kindergartens throughout Europe and around the world. The first kindergarten in the US was founded in Watertown, Wisconsin in 1856 and was conducted in German by Margaretha Meyer-Schurz.

All content from Kiddle encyclopedia articles (including the article images and facts) can be freely used under Attribution-ShareAlike license, unless stated otherwise. Cite this article:
Kindergarten Facts for Kids. Kiddle Encyclopedia.