Elizabeth Palmer Peabody (May 16, 1804 – January 3, 1894) was an American educator who opened the first English-language kindergarten in the United States. Long before most educators, Peabody embraced the premise that children's play has intrinsic developmental and educational value.

Peabody also served as the translator for the first English version of a Buddhist scripture which was published in 1844.

Peabody was born in Billerica, Massachusetts on May 16, 1804. She was the daughter of Nathaniel Peabody, a physician, and Elizabeth ("Eliza") Palmer (1778–1853), and spent her early years in Salem.

After 1822, she resided principally in Boston where she engaged in teaching. She also became a writer and a prominent figure in the Transcendental movement. During 1834–1835, she worked as assistant teacher to Amos Bronson Alcott at his experimental Temple School in Boston. After the school closed, Peabody published Record of a School, outlining the plan of the school and Alcott's philosophy of early childhood education, which had drawn on German models.

It was there that the "Conversations" were held, organized by Margaret Fuller. The first of these meetings between women was held on November 6, 1839. Topics for these discussions and debates varied but subjects were as diverse as fine arts, history, mythology, literature, and nature. Fuller served as the "nucleus of conversation" and hoped to answer the "great questions" facing women: "What were we born to do? How shall we do it? which so few ever propose to themselves 'till their best years are gone by". Many figures in the woman's rights movement took part, including Sophia Dana Ripley, Caroline Sturgis, and Maria White Lowell.

The 1840 Catalogue of the Foreign Library offered several hundred titles in German, French, Spanish, Italian and English languages, including:

In 1852, the bookstore and library located at 13–15 West Street in Boston closed down. Members of the Transcendentalist movement had begun to disperse since the mid-1840s and income from the bookstore had gradually declined. In 2011, the Boston Landmarks Commission designated the building as a Boston Landmark. 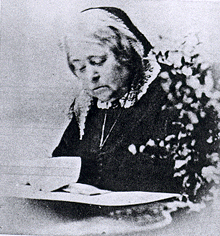 For a time, Peabody was the business manager of The Dial, the main publication of the Transcendentalists. In 1843, she noted that the journal's income was not covering the cost of printing and that subscriptions totaled just over two hundred. In 1844 the magazine published Peabody's translation of a portion of the Lotus Sutra from French, which was the first English version of a Buddhist scripture. The publication ceased shortly thereafter in April 1844.

When Peabody opened her kindergarten in 1860, the practice of providing formal schooling for children younger than six was largely confined to Germany. She had a particular interest in the educational methods of Friedrich Fröbel, particularly after meeting one of his students living in the U.S. 1859 named Margarethe Schurz. In 1867, she visited Germany for the purpose of studying Fröbel's teachings more closely. Through her own kindergarten, and as editor of the Kindergarten Messenger (1873–1877), Peabody helped establish kindergarten as an accepted institution in American education. She also wrote numerous books in support of the cause. The extent of her influence is apparent in a statement submitted to Congress on February 12, 1897, in support of free kindergartens:

The advantage to the community in utilizing the age from 4 to 6 in training the hand and eye; in developing the habits of cleanliness, politeness, self-control, urbanity, industry; in training the mind to understand numbers and geometric forms, to invent combinations of figures and shapes, and to represent them with the pencil—these and other valuable lessons… will, I think, ultimately prevail in securing to us the establishment of this beneficent institution in all the city school systems of our country.

With grounding in history and literature and a reading knowledge of ten languages, in 1840 she also opened a bookstore which held Margaret Fuller's "Conversations" and published books from Nathaniel Hawthorne and others in addition to the periodicals The Dial and Æsthetic Papers. She was an advocate of antislavery and of Transcendentalism. Moreover, she also led decades of efforts for the rights of the Paiute Indians. 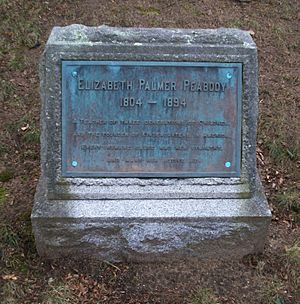 Peabody published a number of works, including:

All content from Kiddle encyclopedia articles (including the article images and facts) can be freely used under Attribution-ShareAlike license, unless stated otherwise. Cite this article:
Elizabeth Peabody Facts for Kids. Kiddle Encyclopedia.