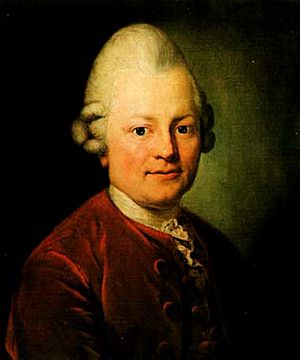 Gotthold Ephraim Lessing (22 January 1729 in Kamenz (Saxony) – 15 February 1781 in Braunschweig) was a German poet and philosopher in the time of the enlightenment.

Lessing was one of twelve children. His father was a Protestant priest. He went to school in Kamenz and got a stipendium for the Higher School in Meißen. From 1746 to 1748, he studied medicine and theology in Leipzig. In 1750, he moved to Berlin, where he met Voltaire. In 1752 he got the Magister (Master) degree from the university in Wittenberg.

He moved back to Leipzig in 1755, but returned later to Berlin. He traveled around in Europe and studied. He worked as a reporter. From 1760 to 1765, he worked as secretary for a general in Breslau (today: Wroclaw). Later he worked at the theater and became a librarian. Lessing got married in 1776. But 1778 his wife died.

All content from Kiddle encyclopedia articles (including the article images and facts) can be freely used under Attribution-ShareAlike license, unless stated otherwise. Cite this article:
Gotthold Ephraim Lessing Facts for Kids. Kiddle Encyclopedia.