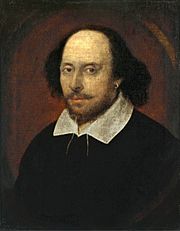 A playwright is a person who writes plays for the stage. Because the name of such a text is drama, another word for this person is dramatist. Sometimes, dramas are written to be read and not played. In that case, they are called closet dramas.

The word wright does not come from write. It is an ancient English term for a builder. For example, a wheelwright makes wheels. In a similar way, a playwright makes plays. When the term was first used, it was meant as an insult. Today it has lost this meaning.

The first playwrights in Western literature whose plays still exist were the Ancient Greeks. They were written around the 5th century BC. These playwrights are important as they wrote in a way that is still used by modern playwrights. Important among them are Aeschylus, Sophocles, Euripides, and Aristophanes.

The most famous playwright may be William Shakespeare. A lot of later work is based on his tragedies and comedies. For example, Kiss Me, Kate is based on Shakespeare's The Taming of the Shrew, and his Romeo and Juliet has been made again many times. Tom Stoppard created the play Rosencrantz and Guildenstern Are Dead in 1966 which is a modern adaptation of Hamlet.

Modern playwrights are usually less famous than past playwrights. Since television and movies were invented, theater has become less popular. Because it is less popular, not as many tickets are sold now, and producers often do not have enough money to make plays, and many playwrights are not known.

All content from Kiddle encyclopedia articles (including the article images and facts) can be freely used under Attribution-ShareAlike license, unless stated otherwise. Cite this article:
Playwright Facts for Kids. Kiddle Encyclopedia.