Kids Encyclopedia Facts
For the geographic definition for a place smaller than a village, see Hamlet (place). 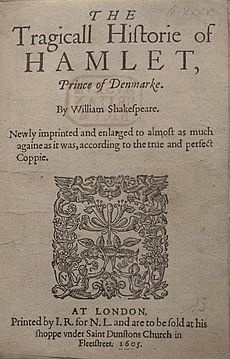 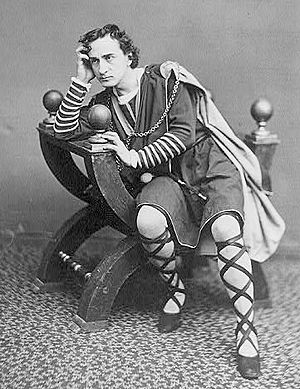 The Tragedy of Hamlet, Prince of Denmark is a tragedy play by William Shakespeare. It is one of his best-known plays, and many lines have become famous quotations. The play is often just called Hamlet.

Hamlet is a young prince in Denmark who was supposed to become king when his father (also named Hamlet) died. Instead, the throne was seized by Hamlet's uncle Claudius, who also married Hamlet's mother, Gertrude. Hamlet meets a ghost of his dead father, who tells him that he was poisoned by Claudius and demands that Hamlet kill Claudius in revenge.

Hamlet is at first not sure whether to believe the ghost, so he tries to investigate. He pretends to be mad to hide what he is doing. As the play goes on, it becomes hard to tell if Hamlet is actually mad or still just pretending. His behaviour causes him to fall out with Ophelia, a girl he was in love with. He eventually has the idea of getting some actors to put on a play of a king being killed in the way the ghost described to see if Claudius reacts guiltily. Claudius panics when he sees the play, and Hamlet sees this as confirmation that he is a murderer.

Hamlet has a chance to kill Claudius in the castle chapel, but cannot bring himself to do it. While waiting outside, he gets into an argument with his mother. Someone moves behind a curtain and Hamlet, thinking it is Claudius, stabs him. It turns out that he has killed Polonius, a royal advisor and Ophelia's father. Claudius orders Hamlet to be exiled to England. He sets up a plot to have Hamlet killed, but Hamlet escapes and returns to Denmark. Meanwhile, Ophelia has been suffering from madness after falling out with Hamlet. After learning that he has killed her father, she drowns herself. Hamlet reappears at Ophelia's funeral and gets into a fight with her brother Laertes. Laertes blames Hamlet for his sister and father's deaths and wants to take revenge. He challenges Hamlet to a sword fight. Hamlet agrees.

The sword fight is arranged to take place at the castle. To get Hamlet killed, Claudius gets Laertes to fight with a sword that has poison on the blade, and brings some poisoned wine in case this does not work. The sword fight begins. After some fighting, Laertes wounds Hamlet and poisons him. During a break, the swords are mixed up and Hamlet ends up fighting and wounding Laertes with the poisoned sword. Laertes shows regret for what he has done and tells Hamlet about the poison as he dies. Meanwhile, Gertrude drinks the poisoned wine by mistake and dies. Realising that he is also dying, Hamlet stabs Claudius with the poisoned sword and forces him to drink the rest of the wine. In his last moments, Hamlet tells his friend Horatio that Fortinbras, a Norwegian prince, should be named as the next King of Denmark.

The characters in the story are:

There have been many movies made of the play. Most of them show only part of the play, because the entire play is very long. Some of the most famous movies include:

All content from Kiddle encyclopedia articles (including the article images and facts) can be freely used under Attribution-ShareAlike license, unless stated otherwise. Cite this article:
Hamlet Facts for Kids. Kiddle Encyclopedia.