Sir Kenneth Branagh (born 10 December 1960) is a British actor, movie director and television producer. He played Hamlet. He has directed and acted in many Shakespeare adaptations. He has acted alongside popular actors including: Emma Thompson, Keanu Reeves, Michael Keaton, Maggie Smith and Alan Rickman.

Branagh has played the title role in BBC radio broadcasts of Hamlet and Cyrano de Bergerac, and the role of Edmund in King Lear. Branagh has narrated several audiobooks, such as The Magician's Nephew by C. S. Lewis. He also participated in the 2012 Summer Olympics opening ceremony portraying Isambard Kingdom Brunel during the Industrial Revolution segment, "pandemonium" giving the speech from The Tempest.

Since Richard Attenborough's death in August 2014, Branagh has been the president of the Royal Academy of the Dramatic Arts in London. 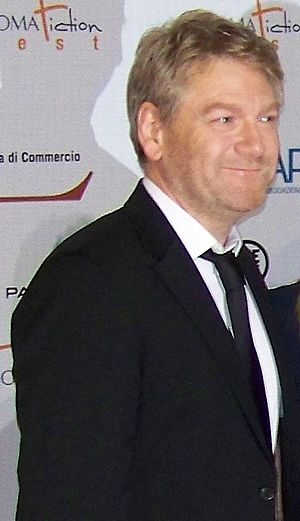 Branagh in July 2009 at the Roma Fiction Fest, where he was honoured with a Lifetime Achievement Award

Branagh, the middle of three children, was born in Belfast, the son of working class Protestant parents Frances and William Branagh. He lived in the Tigers Bay area of the city and was educated at Grove Primary School.

At the age of nine, he moved with his family to Reading, Berkshire, England, to escape the Troubles. He was educated at Whiteknights Primary School, then Meadway School, Tilehurst, where he appeared in school productions such as Toad of Toad Hall and Oh, What a Lovely War!.

He attended the amateur Reading Cine & Video Society (now called Reading Film & Video Makers) as a member and was a keen member of Progress Theatre for whom he is now the patron. Branagh went on to train at the Royal Academy of Dramatic Art in London. In 1980 the Principal of RADA, Hugh Cruttwell, asked Branagh to perform a soliloquy from Hamlet for Queen Elizabeth II, during one of her visits to the academy.

All content from Kiddle encyclopedia articles (including the article images and facts) can be freely used under Attribution-ShareAlike license, unless stated otherwise. Cite this article:
Kenneth Branagh Facts for Kids. Kiddle Encyclopedia.