Paramount Pictures is a production and distribution company. It is the oldest movie studio in the United States. It has been in existence for 100 years. Paramount is owned by media conglomerate Viacom. Paramount is one of the Big Six movie studios

Paramount Pictures Inc. can trace its beginnings to the creation in May, 1912 of the Famous Players Film Company. Organized in 1914 by a Utah theater owner, W. W. Hodkinson, Paramount Pictures was the first successful nationwide distributor. Until this time, movies were sold on a statewide or regional basis. This was inefficient and costly to producers.

In 1916, Adolph Zukor created a three-way merger of his Famous Players Film Company, Jesse L. Lasky's Lasky Feature Play Company, and Paramount. The new company was called Famous Players-Lasky and grew quickly. Lasky ran the production side. Hiram Abrams was in charge of distribution and Zukor handled the business side of the company.

Paramount Pictures had been an early supporter of television. It created stations in 1939 in Los Angeles (later to become KTLA) and Chicago's WBKB. 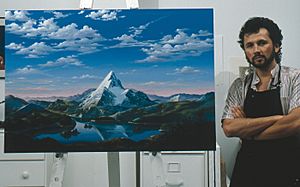 The artist Dario Campanile standing in front of the artwork he created for Paramount Studios for their 75th Anniversary logo-redesign. The painting was used as the source for subsequent logo animation. The original is on display at Paramount Studios.

Paramount's successful run of lightweight pictures in the 1980s and 1990s created hits like Flashdance, the Friday the 13th series; Raiders of the Lost Ark, Beverly Hills Cop and the Star Trek features.

In 1993, entertainment conglomerate Viacom made a bought Paramount.

Paramount is the last major movie studio located in Hollywood. Other studios such as Warner Brothers and Columbia moved to Burbank, California.

On December 11, 2005, Paramount said it had purchased DreamWorks SKG in a deal worth $1.6 billion. On February 1, 2006, the studio announced that the DreamWorks acquisition was completed.

All content from Kiddle encyclopedia articles (including the article images and facts) can be freely used under Attribution-ShareAlike license, unless stated otherwise. Cite this article:
Paramount Pictures Facts for Kids. Kiddle Encyclopedia.