Iron Man 2 is a 2010 American superhero film. It is based on the Marvel Comics character Iron Man. It is the sequel to 2008's Iron Man, the second piece in a planned trilogy. It is the third film released as part of the Marvel Cinematic Universe.

This movie was directed by Jon Favreau and written by Justin Theroux. It stars Robert Downey, Jr., Gwyneth Paltrow, Don Cheadle, Scarlett Johansson, Sam Rockwell and Mickey Rourke. The story is set six months after the events of Iron Man. Tony Stark has revealed his identity as Iron Man. He is resisting calls by the United States government to hand over the technology. Ivan Vanko, meanwhile, has developed the same technology and built weapons of his own. 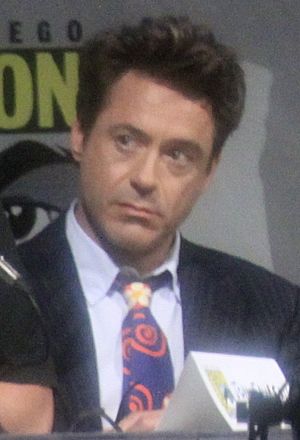 After the successful release of Iron Man in May 2008, Marvel Studios announced and immediately set to work on producing a sequel. In July of that same same year, Theroux was hired to write the script. Favreau was signed to return and direct. Downey and Paltrow were to repeat their roles from Iron Man. Cheadle was brought in to replace Terrence Howard in the role of James Rhodes. In early 2009, Rourke, Rockwell and Johansson completed the supporting cast. The movie went into production that summer. Like its predecessor, the movie was shot mostly in California, except for a key sequence in Monaco.

In Russia, the media covers Tony Stark's disclosure of his identity as Iron Man. Ivan Vanko, whose father Anton Vanko has just died, sees this and begins building a miniature arc reactor similar to Stark's. Six months later, Stark is a superstar and uses his Iron Man suit for peaceful means, resisting government pressure to sell his designs. He reinstitutes the Stark Expo to continue his father Howard's legacy. 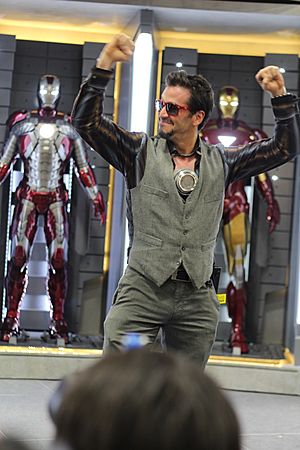 The palladium core in the arc reactor that keeps Stark alive and powers the armor is slowly poisoning him, and he cannot find a substitute. Growing increasingly reckless and despondent about his impending death, and choosing not to tell anyone about his condition, Stark appoints his personal assistant Pepper Potts CEO of Stark Industries, and hires Stark employee Natalie Rushman to replace her as his personal assistant.

Stark competes in the Monaco Historic Grand Prix, where he is attacked in the middle of the race by Vanko, who wields electrified whips. Stark dons his Mark V armor and defeats Vanko, but the suit is severely damaged. Vanko explains his intention was to prove to the world that Iron Man is not invincible. Impressed by Vanko's performance, Stark's rival, Justin Hammer, fakes Vanko's death while breaking him out of prison and asks him to build a line of armored suits to upstage Stark. During what he believes is his final birthday party, Stark gets drunk while wearing the Mark IV suit. Disgusted, U.S. Air Force Lieutenant Colonel James Rhodes dons Stark's Mark II prototype armor and tries to restrain him. The fight ends in a stalemate, so Rhodes confiscates the Mark II for the U.S. Air Force. 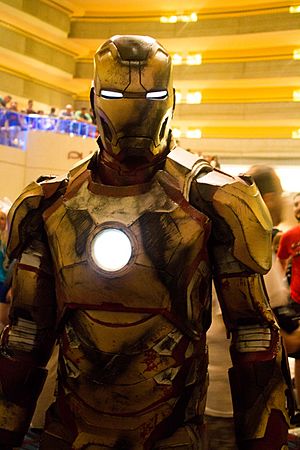 At the Expo, Hammer unveils Vanko's armored drones, led by Rhodes in a heavily weaponized version of the Mark II armor. Stark arrives in the Mark VI armor to warn Rhodes, but Vanko remotely takes control of both the drones and Rhodes' armor and attacks Iron Man. Hammer is arrested while Romanoff and Stark's bodyguard Happy Hogan go after Vanko at Hammer's factory. Vanko escapes, but Romanoff returns control of the Mark II armor to Rhodes. Stark and Rhodes together defeat Vanko and his drones. Vanko seemingly commits suicide by blowing up his suit, along with the defeated drones.

At a debriefing, Fury informs Stark that because of Stark's difficult personality, S.H.I.E.L.D. intends to use him only as a consultant. Stark and Rhodes receive medals for their heroism.

In a post-credits scene, S.H.I.E.L.D. agent Phil Coulson reports the discovery of a large hammer at the bottom of a crater in a desert in New Mexico.

All content from Kiddle encyclopedia articles (including the article images and facts) can be freely used under Attribution-ShareAlike license, unless stated otherwise. Cite this article:
Iron Man 2 Facts for Kids. Kiddle Encyclopedia.