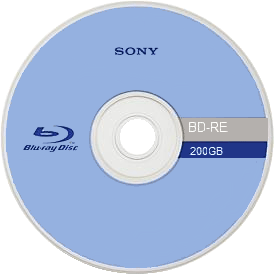 Blu-ray Disc is a high-density optical disc format similar to DVD. Blu-ray is the type of disc used for PlayStation 3 games and for playing high-definition (HD) movies. In the past, there were other standards for such movies, such as the HD DVD format. Blu-ray won what is called the format war.

A dual-layer Blu-ray disc can store up to 50GB (gigabytes) of data. This is over five times the capacity of a DVD, and over 70 times more than a CD or VCD.

The disc was developed by the Blu-ray Disc Association (BDA). a group of consumer electronics, personal computer and media manufacturers. The format was developed to enable recording, rewriting and playback of high-definition video (HD), as well as storing large amounts of data.

While current optical disc technologies such as DVD, DVD±R, DVD±RW, and DVD-RAM rely on a red laser to read and write data, the new format uses a blue-violet laser instead. This is where the name is from.

The "Mini Blu-ray Disc" (also, "Mini-BD" and "Mini Blu-ray") is a compact 8 cm (~3 in)-diameter variant of the Blu-ray Disc that can store 7.8 GB of data in its single layer configuration, or 15.6 GB on a dual layer disc. It is similar in concept to the MiniDVD and MiniCD. Recordable (BD-R) and rewritable (BD-RE) versions of Mini Blu-ray Disc have been developed specifically for compact camcorders and other compact recording devices.

"Blu-ray Disc recordable" refers to two optical disc formats that can be recorded with an optical disc recorder. BD-Rs can be written to once, whereas BD-REs can be erased and re-recorded multiple times. The current practical maximum speed for Blu-ray Discs is about 12×. Higher speeds of rotation (10,000+ rpm) cause too much wobble for the discs to be written properly, as with the 20× and 52× maximum speeds, respectively, of standard DVDs and CDs. Since September 2007, BD-RE is also available in the smaller 8 cm Mini Blu-ray Disc size.

On September 18, 2007, Pioneer and Mitsubishi codeveloped BD-R LTH ("Low to High" in groove recording), which features an organic dye recording layer that can be manufactured by modifying existing CD-R and DVD-R production equipment, significantly reducing manufacturing costs. In February 2008, Taiyo Yuden, Mitsubishi, and Maxell released the first BD-R LTH Discs, and in March 2008, Sony's PlayStation 3 officially gained the ability to use BD-R LTH Discs with the 2.20 firmware update. In May 2009 Verbatim/Mitsubishi announced the industry's first 6X BD-R LTH media, which allows recording a 25 GB disc in about 16 minutes. Unlike with the previous releases of 120 mm optical discs (i.e. CDs and standard DVDs), Blu-ray recorders hit the market almost simultaneously with Blu-ray's debut.

The BD9 format was proposed to the Blu-ray Disc Association by Warner Home Video as a cost-effective alternative to the 25/50 GB BD-ROM discs. The format was supposed to use the same codecs and program structure as Blu-ray Disc video but recorded onto less expensive 8.5 GB dual-layer DVD. This red-laser media could be manufactured on existing DVD production lines with lower costs of production than the 25/50 GB Blu-ray media.

Usage of BD9 for releasing content on "pressed" discs never caught on. With the end of the format war, manufacturers ramped production of Blu-ray Discs and lowered prices to compete with DVDs. On the other hand, the idea of using inexpensive DVD media became popular among individual users. A lower-capacity version of this format that uses single-layer 4.7 GB DVDs has been unofficially called BD5. Both formats are being used by individuals for recording high definition content in Blu-ray format onto recordable DVD media. Despite the fact that the BD9 format has been adopted as part of the BD-ROM basic format, none of the existing Blu-ray player models explicitly claim to be able to read it. Consequently, the discs recorded in BD9 and BD5 formats are not guaranteed to play on standard Blu-ray Disc players. AVCHD and AVCREC also use inexpensive media like DVDs, but unlike BD9 and BD5 these formats have limited interactivity, codec types, and data rates. As of March 2011, BD9 was removed as an official BD-ROM disc. 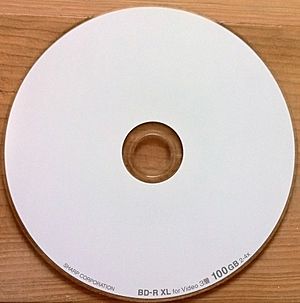 All content from Kiddle encyclopedia articles (including the article images and facts) can be freely used under Attribution-ShareAlike license, unless stated otherwise. Cite this article:
Blu-ray Disc Facts for Kids. Kiddle Encyclopedia.