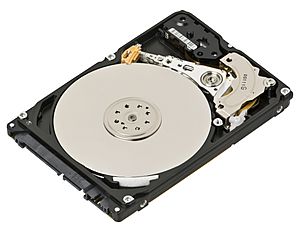 A gigabyte (GB), sometimes abbreviated as a gig, is a unit of measurement in computers and similar electronic devices. At first it meant exactly 1 billion bytes, usually referring to the number of bytes in a computer hard drive. Its meaning gradually changed over time, so that today it is often used to mean 1,073,741,824 (230) bytes, especially when referring to the random access memory (RAM) of a modern computer. Now international standards bodies say a gigabyte should only be used to mean exactly 1 billion bytes, and that gibibyte is a better name for 1,073,741,824 bytes. In everyday use, people use gigabyte to mean 1,073,741,824 bytes when talking about computer memory and 1,000,000,000 bytes when talking about computer disk space.

One thousand gigabytes make one terabyte.

This measurement is often used when measuring the capacity of computer memory, hard drives, or other storage devices.

All content from Kiddle encyclopedia articles (including the article images and facts) can be freely used under Attribution-ShareAlike license, unless stated otherwise. Cite this article:
Gigabyte Facts for Kids. Kiddle Encyclopedia.