Iron Man is a fictional superhero appearing in American comic books published by Marvel Comics. The character was created by writer and editor Stan Lee, developed by scripter Larry Lieber, and designed by artists Don Heck and Jack Kirby. The character made his first appearance in Tales of Suspense #39 (cover dated March 1963).

A wealthy American business magnate, and ingenious scientist, Anthony Edward "Tony" Stark suffers a severe chest injury during a kidnapping in which his captors attempt to force him to build a weapon of mass destruction. He instead creates a powered suit of armor to save his life and escape captivity. Later, Stark augments his suit with weapons and other technological devices he designed through his company, Stark Industries. He uses the suit and successive versions to protect the world as Iron Man, while at first concealing his true identity. Initially, Iron Man was a vehicle for Stan Lee to explore Cold War themes, particularly the role of American technology and industry in the fight against communism. Subsequent re-imaginings of Iron Man have transitioned from Cold War motifs to contemporary matters of the time.

Throughout most of the character's publication history, Iron Man has been a founding member of the superhero team the Avengers and has been featured in several incarnations of his own various comic book series. Iron Man has been adapted for several animated TV shows and films. The character is portrayed by Robert Downey Jr. in the live action film Iron Man (2008), which was a critical and box office success. Downey, who received much acclaim for his performance, reprised the role in a cameo in The Incredible Hulk (2008), two Iron Man sequels Iron Man 2 (2010) and Iron Man 3 (2013), The Avengers (2012), Avengers: Age of Ultron (2015), Captain America: Civil War (2016), and Spider-Man: Homecoming (2017), and will do so again in Avengers: Infinity War (2018) and its untitled sequel (2019) in the Marvel Cinematic Universe.

Iron Man's Marvel Comics premiere in Tales of Suspense #39 (cover dated March 1963) was a collaboration among editor and story-plotter Stan Lee, scripter Larry Lieber, story-artist Don Heck, and cover-artist and character-designer Jack Kirby. In 1963, Lee had been toying with the idea of a businessman superhero. He wanted to create the "quintessential capitalist", a character that would go against the spirit of the times and Marvel's readership. Lee said,

I think I gave myself a dare. It was the height of the Cold War. The readers, the young readers, if there was one thing they hated, it was war, it was the military....So I got a hero who represented that to the hundredth degree. He was a weapons manufacturer, he was providing weapons for the Army, he was rich, he was an industrialist....I thought it would be fun to take the kind of character that nobody would like, none of our readers would like, and shove him down their throats and make them like him....And he became very popular.

Lee also said that "of all the comic books we published at Marvel, we got more fan mail for Iron Man from women, from females, than any other title....We didn't get much fan mail from girls, but whenever we did, the letter was usually addressed to Iron Man." 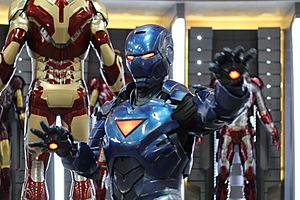 In the movies and the earlier comic books, Tony Stark is just a human. Outside the suit, he does not have any superpowers. He made the suit himself, and nobody else can usually control it. Iron Man can fly and shoot beams from his hands using special technology called "repulsors" in his boots and gloves. He is not hurt by most weapons like guns and cannons. There are many versions of the Iron Man suit, because Stark keeps making improvements.

Stark inherited a large American company called "Stark Industries" when his father died. He was badly injured by a bomb in an attack planned by people who did not like him running his company. Shrapnel from the explosion was moving towards his heart. This would have killed him, but a scientist called Yinsen who was with him made a magnet for his chest which would keep the shrapnel away. In the movies, he makes an "arc reactor" which is put into his chest to stop the shrapnel.

Yinsen and Stark secretly build a heavy suit of armor which they plan to use to escape. However, during the escape, Yinsen dies so that the kidnappers will be distracted from Stark escaping. Stark escapes safely and goes back to America. He makes a better suit and uses it to fight evil.

Tony Stark is very proud, and often very selfish. Sometimes he makes very bad decisions, either because he does not think enough about what he is going to do, or because he does not realize how his actions will affect others. For example, in the comics, he does a lot of things that he regrets during the Civil War. He did not have a good childhood, and this affects how he acts.

Stark is very smart, and a very talented inventor. His technology is always very advanced, and Iron Man is his greatest piece of work. In both the comics and the movies, he uses the arc reactor (or "repulsor technology") as a form of sustainable energy to help the world.

Stark has very few close friends. Two of them are Pepper Potts, his personal assistant who becomes his girlfriend, and James Rhodes, an American soldier who operates the War Machine armor. In the comics, he is very close to Steve Rogers, who is the first Captain America.

All content from Kiddle encyclopedia articles (including the article images and facts) can be freely used under Attribution-ShareAlike license, unless stated otherwise. Cite this article:
Iron Man Facts for Kids. Kiddle Encyclopedia.