Jack Kirby (August 28, 1917–February 6, 1994) was one of the most influential, recognizable and prolific artists in United States comic books. Born Jacob Kurtzberg in New York City, he was also a comic book writer and editor.

He worked for Fleischer Studios from 1935 where he did in-betweens for Popeye animated cartoons. He joined the Lincoln Newspaper Syndicate in 1936 and worked for them until they went out of business in 1938.

Kirby met Joe Simon while he was producing freelance work for a variety of publishers. The two young men teamed up and began producing packaged comic books for sale to publishers. The duo created the patriotic hero Captain America for Timely Comics (later Marvel Comics) publisher Martin Goodman in 1941. Kirby's dynamic perspectives, ground-breaking use of center-spreads, cinematic techniques and exaggerated sense of action made the title an immediate hit and rewrote the rules for comic book art.

The Simon & Kirby name became synonymous with exciting superhero comic books. After ten issues of Captain America, they moved to DC Comics where they took over the Sandman in Adventure Comics; they also produced Boy Commandos, Newsboy Legion and Manhunter.

As superhero comics waned in popularity after the end of World War II Kirby and his partner began producing a variety of other genre stories. They are credited with the creation of the first romance title, Young Romance Comics. In addition Kirby and Simon produced crime, horror, western and humor comics.

The Kirby & Simon partnership ended in 1954. Kirby continued to create comics, reinventing Green Arrow in Adventure Comics and creating the well-received classic about a group of death defying adventurers, the Challengers of the Unknown.

Kirby returned to Marvel Comics where he drew a series of imaginative monster, horror and science fiction stories for its many anthology titles. Kirby's bizarre designs of powerful unearthly creatures were a hit with the reading audience. At the bidding of publisher Martin Goodman and editor, art director and chief writer Stan Lee, Kirby began working on superhero comics again in 1961.

Kirby had a hand in the creation of nearly every character for Marvel for the next several years. Some of the highlights include such characters and concepts as the Fantastic Four, Thor, the Incredible Hulk, Iron Man, the original X-Men, the Silver Surfer, the Avengers, Doctor Doom, Galactus, Magneto, the Inhumans and their hidden city of Attilan, and the Black Panther and his African nation of Wakanda.

Simon's and Kirby's Captain America was re-incorporated to Marvel continuity, after Lee noticed that the public could appreciate his return. In turn, Kirby approved of Lee's ideas to deepen the personality of the character.

Kirby's speedy output as a storyteller and co-plotter moved Lee, in his role as Marvel's editor and art director, to have Kirby provide only the pencil art for his stories; Lee would refer to Kirby's pencil art to create the script and assign inkers, letterers and colorists to make the work reproducible. 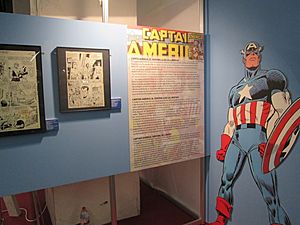 Captain America: the sentry of freedom. Exhibition on Captain America, the superhero created by Joe Simon and Jack Kirby, which was first published in December 1940

After a falling out with Lee and Goodman, Kirby returned to DC in the early 1970s where he produced a series of titles under the blanket sobriquet The Fourth World. The titles he produced included The New Gods, Mister Miracle, and The Forever People along with such other unique books such as OMAC, Kamandi, The Demon, and a new incarnation of the Sandman. Several characters from this period have since become fixtures in the DC universe, including the demon Etrigan and his human counterpart Jason Blood, Scott Free (Mister Miracle), and the cosmic villain Darkseid.

He later returned to Marvel Comics where he returned to Captain America to both write and draw the title. His other Marvel creations in this period included Devil Dinosaur, The Eternals, and an adaptation and expansion of the film 2001: A Space Odyssey. He eventually left Marvel and comic books to work in animation, where he did designs for Turbo Teen and Thundarr the Barbarian as well as others.

Pacific Comics, a new non newsstand comic book publisher, then made a ground breaking deal with Kirby to published his series Captain Victory; Kirby would retain copyright over his creation and receive royalties on it. This in turn began a precedent that helped other talents strive to receive similar consideration for their work in comic books. 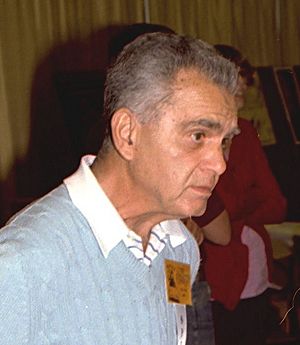 Kirby is popularly acknowledged by comics creators and fans as one of the greatest and most influential artists in the history of comics. His productive output was legendary as one count estimates that he produced over 25,000 pages during his lifetime as well as hundreds of comic strips and sketches. He also produced paintings, and worked on numerous concept illustrations for a number of Hollywood films.

In 1985 it was revealed that dozens of pages of Kirby's artwork had been 'lost' by Marvel Comics. Jacob Kirgstein, a character in The Authority comic-books, is clearly inspired by Jack Kirby. The Kirby Awards were named in honor of Jack Kirby.

In the animated television series, Superman: The Animated Series, the supporting character, Dan Turpin is modeled visually after Jack Kirby.

Phantom Force was the last comic book which Jack Kirby worked on before his death. The story was based on an eight-page pitch for an unused Bruce Lee comic in 1978.

On February 6, 1994, Kirby died at age 76 of heart failure in his Thousand Oaks, California home. He was buried at the Pierce Brothers Valley Oaks Memorial Park, Westlake Village, California.

All content from Kiddle encyclopedia articles (including the article images and facts) can be freely used under Attribution-ShareAlike license, unless stated otherwise. Cite this article:
Jack Kirby Facts for Kids. Kiddle Encyclopedia.