Lee is famous for making martial arts popular in the United States in the 1970s, when he played in a series of movies. This included the first ever martial arts movie in the United States - called Enter the Dragon. This was the most successful and famous, which was released after Bruce's death. He died in 1973 during the production of a movie called, The Game of Death. The movie was not finished, although some completed section were later released. Almost 20 years later his son, Brandon Lee would also die while making a movie. Lee also taught other people martial arts, including actors Huggo Chairres, Steve McQueen, James Coburn, and basketball player Kareem Abdul-Jabbar. He inspired many other actors who are famous for using martial arts in their movies including Jackie Chan, Jet Li, and Chuck Norris. Jackie Chan had a small part in 'Enter The Dragon' and Chuck Norris co-starred in Way of The Dragon. 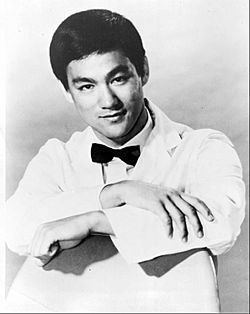 On the night of July 20, 1973, Lee aged 32, died at his home from cerebral edema, which is a buildup of fluid around the brain. This is believed to have been caused by a reaction to painkillers he was taking for a back injury.

All content from Kiddle encyclopedia articles (including the article images and facts) can be freely used under Attribution-ShareAlike license, unless stated otherwise. Cite this article:
Bruce Lee Facts for Kids. Kiddle Encyclopedia.