The first Chinese immigrants arrived in 1820 according to U.S. government records. Fewer than 1,000 are known to have arrived before the 1848 California Gold Rush which drew the first significant number of laborers from China who performed menial work for the gold prospectors.

Chinese people were some of the early immigrants to live in the U.S., but then were banned from emigrating between 1885 and 1943 - when the Chinese Exclusion Act was repealed. Immigration of Chinese was heavily restricted until 1965. 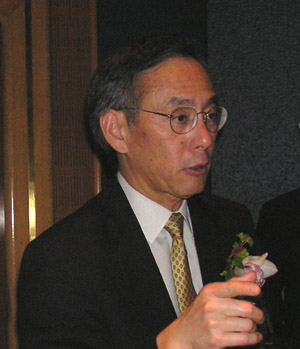 Professor Steven Chu is among the several Chinese Americans to have won the Nobel Prize. The others are Tsung-dao Lee, Samuel C. C. Ting, Daniel Chee Tsui, and Chen Ning Yang.

The Chinese who immigrated to America in the earlier decades were mainly from the area of Guangdong (Canton) and later Hong Kong. However, recently, more Chinese from mainland began to arrive to perform skilled jobs. Most of these Chinese Americans hold high educational degrees and value education.

Chinese, mostly of the Cantonese variety, is the third most-spoken language spoken in the United States, almost completely spoken within Chinese American populations and by immigrants or the descendants of immigrants, especially in California. Over 2 million Americans speak some variety of Chinese.

Although Chinese Americans grow up learning English, some teach their children Chinese for a variety of reasons such as of pride in their cultural ancestry.

All content from Kiddle encyclopedia articles (including the article images and facts) can be freely used under Attribution-ShareAlike license, unless stated otherwise. Cite this article:
Chinese American Facts for Kids. Kiddle Encyclopedia.