Fourteenth Amendment to the United States Constitution facts for kids 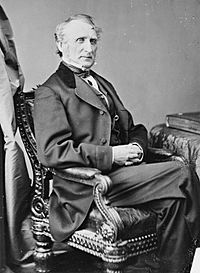 Representative John A. Bingham of Ohio, the main author (framer) of the Fourteenth Amendment

The Fourteenth Amendment (Amendment XIV) to the United States Constitution was adopted on July 9, 1868. It was one of the Reconstruction Amendments. The amendment discusses citizenship rights and equal protection of the laws. It was proposed in response to issues related to former slaves following the American Civil War. This amendment was bitterly contested. Southern states were forced to ratify it in order to regain representation in Congress. The Fourteenth Amendment is one of the most litigated parts of the Constitution. It forms the basis for landmark decisions such as Roe v. Wade (1972), and Bush v. Gore (2000). It remains the most important Constitutional amendment since the Bill of Rights was passed in 1791.

At the end of the Civil War, Abraham Lincoln freed the slaves. The problem was, he did not ask Congress. Congress had not passed a law to free slaves. Meanwhile, some states still had slavery. The Thirteenth Amendment freed the slaves. It became law in late 1865. Three years later the Fourteenth Amendment provided civil rights. Republicans controlled Congress during this period. They wanted to give full citizenship to freed slaves. But they also realized that giving civil rights to blacks, it opened the door for women's suffrage. It would lead to giving women the right to vote, which Congress did not want to do. If only section one was included in the amendment, the wording "all persons born or naturalized in the United States" would include women. For this reason, the word "male" was inserted in section two so the amendment would be approved by Congress.

The first section of the Fourteenth Amendment gave citizenship to “all persons born or naturalized in the United States”, and "subject to the jurisdiction thereof". The second clause, commonly called the Privileges and Immunities Clause, states that "the citizens of each state shall be entitled to all privileges and immunities of citizens in the several states." This gave all Americans the protection of civil rights under the law. It forbids states from denying citizens their life, their liberty or their property without due process. States could not deny persons "equal protection of the laws." It meant that for the first time all people would have the same protection no matter what their color. The fact that states were mentioned makes them responsible for these protections the same as the federal government. The Fourteenth Amendment is cited more often in law suits than any other amendment.

The second section changed a part of the original Constitution which counted slaves as three-fifths of a person. This was for the purpose of determining how many U.S. congressmen a state could have (apportionment). The second section established that every citizen would be counted as one person.

The third section was intended to be strict with members of the Confederacy who fought against the United States. It required a two-thirds vote of Congress to allow leaders of the Confederacy to regain their citizenship or hold office. To be allowed to hold a federal office, former confederates had to swear an oath to uphold the constitution. Section four said the federal government would not repay Confederate debts. Section five means what it says, Congress will enforce the provisions of the 14th amendment.

Section 2. Representatives shall be apportioned among the several States according to their respective numbers, counting the whole number of persons in each State, excluding Indians not taxed. But when the right to vote at any election for the choice of electors for President and Vice President of the United States, Representatives in Congress, the Executive and Judicial officers of a State, or the members of the Legislature thereof, is denied to any of the male inhabitants of such State, being twenty-one years of age, and citizens of the United States, or in any way abridged, except for participation in rebellion, or other crime, the basis of representation therein shall be reduced in the proportion which the number of such male citizens shall bear to the whole number of male citizens twenty-one years of age in such State.

Section 3. No person shall be a Senator or Representative in Congress, or elector of President and Vice President, or hold any office, civil or military, under the United States, or under any State, who, having previously taken an oath, as a member of Congress, or as an officer of the United States, or as a member of any State legislature, or as an executive or judicial officer of any State, to support the Constitution of the United States, shall have engaged in insurrection or rebellion against the same, or given aid or comfort to the enemies thereof. But Congress may, by a vote of two-thirds of each House, remove such disability.

Section 5. The Congress shall have power to enforce, by appropriate legislation, the provisions of this article.

All content from Kiddle encyclopedia articles (including the article images and facts) can be freely used under Attribution-ShareAlike license, unless stated otherwise. Cite this article:
Fourteenth Amendment to the United States Constitution Facts for Kids. Kiddle Encyclopedia.