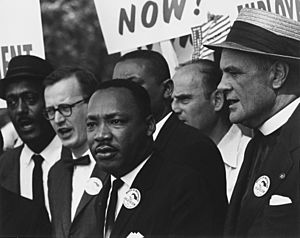 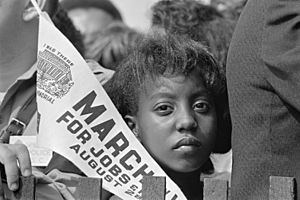 A Young Woman Holds a Banner at the Civil Rights March on Washington, D.C., on August 28, 1963

In many countries civil rights include freedom of speech, freedom of the press, freedom of religion, and freedom of assembly. Civil rights also include the right to own property and the right to get fair and equal treatment from the government, from other citizens, and from private groups. They may prevent against discrimination based on race, sexual orientation, gender, gender identity and disability.

Civil rights are protected by law and custom. The constitutions of many democracies have a "Bill of Rights" that describes the people's liberties and rights. A well-known example is the United States Bill of Rights.

A court of law decides if a person's civil rights have been violated. The courts also decide the limits of civil rights, so that people do not use their freedoms to take away the rights of other people.

All content from Kiddle encyclopedia articles (including the article images and facts) can be freely used under Attribution-ShareAlike license, unless stated otherwise. Cite this article:
Civil rights Facts for Kids. Kiddle Encyclopedia.