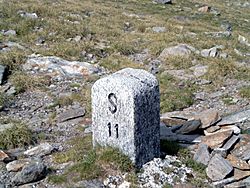 The border between two regions is a line, where one region is next to the other. If the regions are countries, the border can only be crossed at certain points. To cross the border, a passport or a visa might be necessary; such as the Wagah border between Pakistan and the Republic of India.

All content from Kiddle encyclopedia articles (including the article images and facts) can be freely used under Attribution-ShareAlike license, unless stated otherwise. Cite this article:
Border Facts for Kids. Kiddle Encyclopedia.